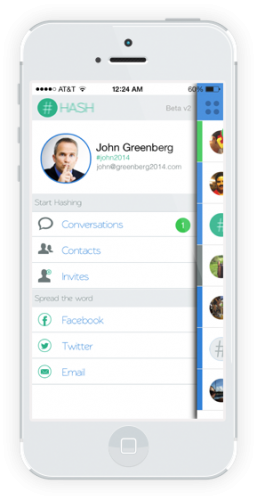 Miami, Fl,, USA - - December 2, 2013 /MarketersMedia/ — Innovative Venture, S.A. the makers of HASH, a private mobile messaging app aiming to do for text messaging what Snapchat did for the privacy of photo messages, announced a user acquisition milestone of 50,000 App Store downloads in only 36 days.

Said Mayer Mizrachi, CEO of Innovative Venture, “We were actually stunned by the speed by which HASH has been embraced by the public. We figured it might take a bit of time for people to catch on to the actual experience of having genuine privacy and security in text messaging. But clearly we under estimated the demand for it. ”

User reviews seem to support that view with a range of comments that indicate the public desire for privacy and security in text messaging is both broad and passionate.

The purpose of HASH is to bring to text messaging the same confidence and security that people feel when they have a private conversation in person. HASH accomplishes this by enabling mobile users to send and receive text messages that are both untraceable and screenshot-proof. It was initially targeted specifically for politicians and businessmen but in an almost daily news cycle of questionable government spying practices, and new technologies that allow anyone to grab messages and distribute them through social photo sharing, HASH seems to have hit a nerve and tapped into an existing, pent up consumer demand for privacy.

HASH came about as something of a side project for Innovative Venture. Said Mizrachi :

“The idea for HASH emerged when we were building the digital strategy for a Presidential Campaign in Panama. A candidate’s private and candid conversation became an embarrassing news bite and it fundamentally changed the campaign and forced the candidate to actually drop out of the race, all because of a text message that was never intended to be public . That is when we recognized that there was a need for a communication tool that allowed users to communicate privately with the peace of mind that no one else would find out. It makes sense for all of us, not just politicians, because for every message that you’ve sent in your life, there’s at least one copy of it in someone else’s phone. With HASH this is no longer true. Now, you are in control of the privacy of things you say.”

Innovative Ventures also announced that it will soon release HASH for the Android platform where it will be available on the Play Store.

About HASH:
HASH is a private and secure messaging app that provides mobile users with completely secured communications with friends, colleagues, and business contacts. It allows users to send private hack-proof texts and messages of up to 120 characters in length including secured photos. Hash messages are completely untraceable and screen shot proof protecting the privacy of both the sender and receiver from hackers, personal and corporate spying, and casual prying eyes. HASH is available on iOS for free worldwide via the Apple AppStore.

About Innovative Venture S.A.:
Innovative Venture is an early stage Panama-based software development company founded by Mayer Mizrachi in 2011. It focuses on developing disruptive technologies that influence and improve the daily lives of people in Latin America and the rest of the world. The company has offices is Panama, Ecuador and Miami.