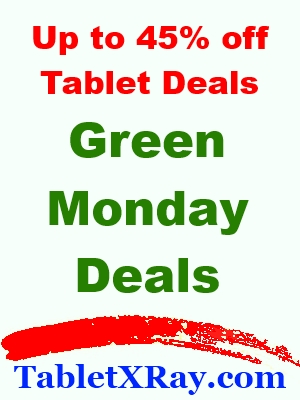 Chicago, IL, USA - - December 9, 2013 /MarketersMedia/ — Many tablet computers received considerable price cuts on Black Friday and Cyber Monday 2013. The most popular deals were on the Amazon Kindle Fire and Apple iPad range of tablets. Several tablets are on sale this Green Monday, December 9th 2013 as well. The Green Monday Kindle Fire HD deals are particularly attractive as the Cyber Monday deal on the budget model of the Amazon Kindle Fire HD did not last long.

Details on the BEST 2013 Green Monday Deals on the Kindle Fire and other tablets can be found on http://tabletxray.com/holiday-deals/

One of the potential problems consumers may have to face is making the decision about which Kindle Fire tablet to select. For example, the HD model is cheaper than the Kindle Fire HDX model. On what basis should the consumer select between the two? The cheaper 3rd generation Kindle Fire HD model will satisfy the requirements of most tablet users today. It has a high definition screen with a 1280 x 800 (216 ppi) resolution, which is pretty impressive by modern standards. Even though it feels inferior compared to the 1920 x 1200 (323 ppi) resolution of the Fire HDX, 1280 x 800 pixels is considered high definition. It also has a 1.5 GHz dual-core processor which is capable of handling almost all modern tablet applications including android games, downloading web-content and playing music and movies. Sure it is not as powerful as the 2.2 GHz quad-core Qualcomm Snapdragon 800 processor of the Fire HDX tablet, nevertheless powerful enough for day-to-day operations by the majority of tablet users. One of the major limitations of the budget model is that it is not equipped with a camera and mic. Therefore, it cannot be used for video chatting using programs such as Skype. If anybody wishes to purchase a Kindle Fire tablet for a child, this may be the ideal given it's wallet-friendly price. However, for someone looking for a full fledged tablet, the Kindle Fire HDX is more suitable.

Other tablets on sale this Green Monday 2013 include the Samsung Galaxy Tab 3, ASUS MeMO Pad, Lenovo Ideatab, ASUS Vivotab, Acer Iconia, Lenovo ThinkPad, Tivax MiTraveler and children's tablets like the LeapFrog LeapPad2. Discounts on some of these are as steep as 45% off the list price.

Those who missed the tablet computer deals on 2013 Black Friday or Cyber Monday, can grab the Green Monday tablet deals. Savings on most of them are not as good as those seen on December 2nd Monday, nevertheless steep enough to take advantage of given that it's unlikely that deals at this level will be offered through the rest of the 2013 holiday season.

In addition to Green Monday Tablet Deals, Tablet XRay have also published reviews on the Kindle Fire HDX 8.9" and 7" tablets as well as comparisons between them and the Apple iPad Air and Google Nexus tablets.