Convert Audio Free have made available a video converter that will convert MKV files, based on open source Matroska binary XML, into a wide variety of more playable formats. 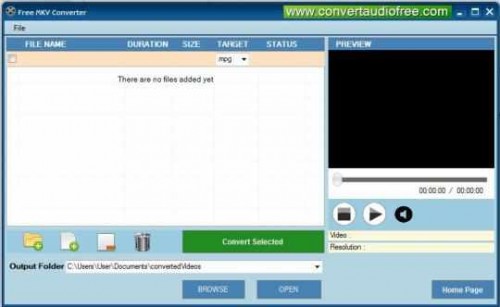 Seattle, WA,, United States of America - - November 27, 2013 /MarketersMedia/ — Matroska is an open source, binary version of the XML programming language that allows for individuals to combine various different media and formats into a single ‘envelope’ file, playing back as programmed in niche video players like VLC. However, many people don’t have VLC as a default player and many more find the limitations excessive when it comes to viewing their media on tablets and mobile devices. To fix this limitation, Convert Audio Free has created a new MKV converter software that will allow users to use the files is any number of formats.

The software will allow users to quickly add MKV files to the list pane in the intuitive user interface and simply select from a drop down menu which file format they would like the MKV to be converted to. A copy of the MKV file will then be produced in the same format.

A spokesperson for Convert Audio Free explained, “Matroska files are an exciting premise for the future but right now their use is limited to early adopters, who when disseminating their files across the internet cause others to run into major compatibility issues. The good thing is that we can now give all users the best of both worlds by allowing those who can’t play MKV files to be able to convert them into one of many major formats for use on different default players across PC, Mac and Mobile. This may in fact positively affect MKV as it holds clear advantages for sending and receiving files despite issues with playback.”

About Convert Audio Free:
Convert Audio Free develops specialist conversion software for audio and video formats. Operating in the industry for over two years, they are now syndicated by major resource repositories throughout the internet and are respected by critics and users alike. They prioritize ease of use and create comprehensive conversion solutions based on the many requirements of the modern user.