Convert Audio Free has made it easy for people getting videos from YouTube to convert them to files that will play on their desktops, laptops and mobile devices. 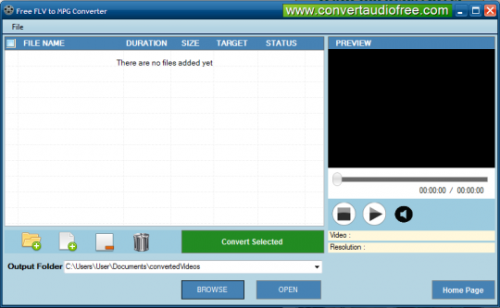 Seattle, WA,, United States of America - - December 4, 2013 /MarketersMedia/ — Flash Video, or FLV as it is also known, is a popular choice of video encoding process with online video streaming services like YouTube, owing to its lightweight size and relatively high image quality. The problem with FLV is that it must be played by Flash Player, which is not a free service when required for desktop use. Furthermore Flash Player is not available for Android devices and not compatible with iPhones. To solve this drawback and allow media downloaders to play their videos wherever they want, Convert Audio Free - after the success of their FLV to MPG Converter- has created a new FLV to MP4 converter.

The converter works very simply by asking users to add the original FLV file to a list pane before selecting to convert. The conversion process itself is fully automated and results in high quality MPG files which match the source attributes of things like aspect ratio and megabytes per second.

Once users have converted FLV to MP4, the original file remains unaffected and a duplicate MP4 will appear next to it which is ideal for playback on the iPhone and other Mac devices that do not support Flash. The software can be downloaded from the Convert Audio Free website or from any number of resources centers like CNET and Softpedia.

A spokesperson for Convert Audio Free explained, “This software was developed in response to demand from our regular users who found that FLV files popular with online streaming services wouldn’t play once downloaded onto their computers and other devices. MPG is a universal video codec and even works when burning DVDs, making it the ideal codec to convert to. By using the software to convert FLV to MP4 individuals are saving themselves time and headaches when it comes to compatibility, and can then enjoy their media anywhere at any time.”

About Convert Audio Free:
Convert Audio Free has been creating best quality sound conversion software since 2011. After two years establishing an excellent reputation in the field of audio they have now moved on to video codec converters, and are expanding their library of products regularly. The software can be found on their website as well as major syndicators like CNET and Softpedia.