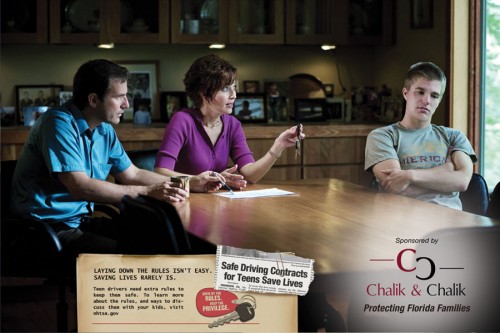 In the United States, the car crash risk is on the rise among teenagers, especially during the first few months of becoming licensed. In fact, the leading cause of death among teenagers between the ages of 15 - 21 are car accidents, according to the NHTSA.

Jason and Debi Chalik believe there are certain methods parents can use to help their teenagers become safer drivers. "Nothing is more devastating than seeing your child injured or worse," says Attorney and co-founder, Jason Chalik.

“Parents who establish, enforce and monitor safe driving practices raise teenagers who are more likely to respect and obey the driving laws. As a result, they are less likely to get involved in car accidents.”

As accident injury lawyers in Florida they have witnessed far too many incidents where teens were injured in preventable car accidents. As a family run law firm who treats every client like family, they want to do what they can to protect area families from preventable situations.

The South Florida law firm has developed the Teen Safe Driving Initiative exclusively for parents who want to protect their teens. Parents are asked to team up with their teens and sign a contract agreeing to safe driving, ‘Drive By the Rules, Keep the Privilege’. Teens should sign a contract before they get keys to the car.

During National Teen Driver Safety Week, teens and parents who sign the contract will be automatically entered in a prize drawing to win 2 mini iPads. One will be awarded to the teen and one for the parent on October 31st. The event will be closed for entries on the 30th.

National Teen Driver Safety Week is open to Florida residents only. Teens must be at least 15 years old to enter the drawing. Parents can download a copy of the Parent and Teen Safe Driving Contract and a guide entitled: ‘Talking to Your Teen About Safe Driving’, on the Chalik & Chalik website.

About Chalik & Chalik Law Firm:
Debi Chalik and Jason Chalik are both founding partners of the law firm. They specialize in personal injury with a variety of practice areas ranging from car accidents to work injuries. The family law firm is located in South Florida with a variety of law offices throughout the state. As advocates of family values, Debi and Jason Chalik strive daily to help parents protect their children from car accidents.