Lake Cup Regatta has evolved into a competitive and ornamental sailing event, attracting a large audience to participate and has become a golden autumn festival for the host city. 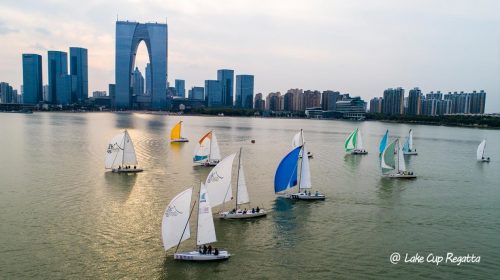 September 29, 2019 /PressReleaseAgency/ — Lake Cup Regatta is a famous urban sailing event in China. The venue of the event - Jinji Lake in Suzhou, is the largest inner city lake in China and a national AAAAA business tourism scenic spot in China. It is surrounded by a large number of commercial complexes, high-end residential areas, cultural and art museums, as well as Expo Center, Concert Hall and Opera House. It is densely populated, economically prosperous, and beautiful.

Since its inception in 2011, Lake Cup Regatta has been integral to the unique urban landscape of the lake. Lake Cup Regatta has evolved into a competitive and ornamental sailing event, attracting a large audience to participate and has become a golden autumn festival for the host city. China has created a wave of lake sailing events. After nine consecutive editions, Lake Cup Regatta has not only become an annual competition, but it has also opened up employment opportunities across diversified fields, such as sailing training, tourism and leisure, and has been recognized and appreciated by the local government.

The 10th Lake Cup Regatta, Jinji Lake Regatta, will be held during October 11-13, 2019 in Jinji Lake, Suzhou. The competition is divided into J/80 group, DC20 group and OP youth group. The total number of participants is expected to be nearly 200, of which foreigners account for 8%. Participants from the United Kingdom, the United States, France, Canada, Australia, Belgium, Slovenia and other countries, including both professional athletes and sailing enthusiasts, will sail on Jinji Lake to foster the professionalism and to making the Lake Cup Regatta a true international event.

Besides being a competitive and high-levsel sailing event, Lake Cup Regatta takes full advantage of the Suzhou Jinji Lake Scenic Area, and combines sailing events with international events such as the International Music Festival, the Sailor's Night, and the Sailing Music Festival. Michael S, a sailor from the United States, has been participating in the Lake Cup Regatta for three consecutive years. He is looking forward to the 10th Lake Cup Regatta as he can compete with sailors from all over the world, while enjoying music, food and rave parties. That would be a very interesting experience which Michael is looking forward to.

Nenad from Slovenia is also a big fan of Lake Cup Regatta. Nenad thinks Lake Cup Regatta is a great event. The organizing committee has made a lot of efforts for the making the 10th edition successful. Nenad said: "My goal has always been to be a sailing champion. I hope to form a strong team this year!"

Bill Chan, the founder of Lake Cup Regatta, said that Suzhou is a beautiful city with a thousand years of history. Sailing is a sunny, healthy and fun open sport. Lake Cup Regatta is an annual event which sailors all over the world look forward to. “By providing a platform for mutual exchange, I hope more and more international players and sailing enthusiasts would come to Suzhou and join the Lake Cup Regatta”, he said.