On Evernote's 8th anniversary, the company expects to welcome its 200 millionth customer. The CEO of Evernote reflects what's most important, looks ahead to a bright future, and makes a promise to customers. 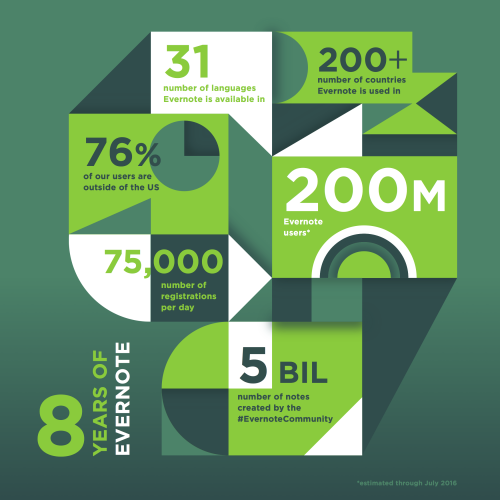 Sydney, Melbourne, Brisbane, Perth, Adelaide, Australia - June 23, 2016 /MarketersMedia/ — This week is Evernote’s 8th anniversary. On this anniversary, Evernote is about to reach a staggering statistic: in July, Evernote expects to welcome its 200 millionth customer. These customers live in 200+ countries. They speak 31 languages. This not only reflects a global nature of Evernote, but shows the one thing customers have in common: they trust their ideas, documents, notes, and dreams to Evernote.

Among Evernote's 200 million users, 76% live outside of the United States, with a significant 35% residing in Asia. China represents roughly 10%, Japan 5%, and the rest of APAC 20%. Australia is home to nearly 3 million users, and is one of Evernote’s top 10 countries by revenue, along with others in the APAC region - Japan, China, Korea, and Taiwan. The company is building and currently expanding its user community by reaching out to active users through Evernote Certified Consultant Program and Evernote Community Leader Program globally.

Chris O’Neill, the CEO of Evernote emphasised the company’s core belief. “We believe in the infinite potential of any idea” he told media at a recent press conference in Japan on June 22. “It’s called “Evernote” for a reason. We are a champion of people's ideas from the moment they capture, preserve, nurture and share. Thoughts stay forever in Evernote."

Chris envisions Evernote's product to evolve from something which helps people “remember” to a service which assists people “think.” Evernote will continue to play well with others to offer integrated experiences. Over the past several months Evernote has added integrations with Microsoft Outlook, Google Drive, and Salesforce to deliver seamless productivity experiences across services and platforms.

A promise to customers

To celebrate the 8th anniversary, Evernote makes a promise to customers. "We owe it to you and to our future users to continue to perfect Evernote for both individuals and teams. A note is the beginning of an idea, and ideas are for the ages. That is the commitment of #forevernote” written by Chris on Evernote's 8th birthday.