EP Evans, Influential Rap Artist, Is About to Break the Airwaves with New EP Early 2020

EP Evans, a native of Tulsa, Oklahoma, is creating shockwaves in the rap community, showing that he’s here to stay. 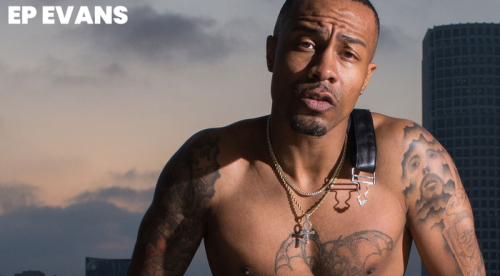 Miami - January 17, 2020 /MarketersMedia/ — EP Evans, a native of Tulsa, Oklahoma, has amassed a staggering following on social media sites after his release of the EP “Vibe Sessions.” Currently, EP Evans has over 20 million YouTube videos across all of his videos. He began writing and recording his own music at the age of 13. In 2003, EP thought that he may have made it into the mainstream music scene with Universal Records, but later, struggled to make the deal due to complications with his manager. The year later, he founded his own record label named “Sophisticated Hustlas Entertainment” and signed a total of 6 artists.

As EP’s music career began to start, he began seeing interest from local college stations and eventually mainstream radio stations. After gaining some momentum, EP Evans struggled through his label breaking up. Looking forward, EP saw a dim future in the music business and started working on getting his nursing degree. From here, he the drive to have a career in music still burned within him, and he knew he needed more capital to get it started. He branched in coordination with his friend’s father to brand a family recipe BBQ, which they named “Sweet Addictions.”

After finishing nursing school, E.P moved to Los Angeles with his daughter in 2017 to work as a nurse and pursue his music career. He mentions that this is where he knew his new journey would begin. In the early stages of living in Los Angeles, EP discovered his talent for acting and auditioned for a few short films and stage plays. By looking for acting gigs, Dhar Mann, a production company owner, discovered EP and helped him go viral. Visit his homepage at http://iamepevans.com/.

About EP Evans: I began writing and recording music at the age of 13. After my sister Robin had the potential to strike a major Recording Deal with her current boyfriend, which later failed due to a unforeseen pregnancy. I then decided to walk my own path with the hopes of having huge success in the music business. Fast forward to 2003 where I would later have my own chance at striking a deal with Universal Records. Little did I know I would run into power struggles with my current manager at the time that hindered my deal from being inked and signed. I then realized I had to create my own path. So in 2004 I jump started my own Recording Label called "Sophisticated Hustlas Entertainment". I signed a total of 5 to 6 artist, one group and one solo artist. We had some success with college radio stations, on up to syndicated mainstream radio stations as well. With every fortune comes pending obstacles that would later break the contract between S.H.E. and my artist. With my future as a music mogul looking uncertain, I later decided to go back to school and get a degree in Nursing. My decision to get my Nursing degree stemmed from me needing steady capital or income to continue this journey into the entertainment industry. While in Nursing School I decided that I needed to create an extra source of income which lead me to start a home health contracting business. With the new business I created, I would hire 4 nurse assistance that would go to clients home and assist the clients with their activities of daily living needs. While I connected the dots between client and employee I made a said amount without manual labor and was able to focus more on school than me having to clock in and out of an additional job away from my full time job that I was currently working to supplement income. In 2015 I graduated Nursing school with my Bachelors. I knew with my degree I could travel and be financially stable to support my daughter and I in cities like Los Angeles and continue pursuing my career in music comfortably. About a year or two into working as a Nurse I began traveling nursing which later lead me to a job in Los Angeles in 2017. I knew this is where my new journey would began I was now in a city where my talents could be recognized. I discovered a new talent in Acting and began to audition for short films and stage plays. I began booking gigs and later was discovered by a guy named Dhar Mann who owns a production company and specialize in filming inspirational short clips for Facebook , Instagram and YouTube that enabled me to go viral reaching up to 20 million plus views each clip we filmed. Needless to say my social media following grew to over 80,000+ people and that helped me become known to many across the world. I currently have an EP out available on all digital platforms called "Vibe Sessions" released in 2019 and will be releasing another EP "Vibe Sessions 2" early 2020. I will be marketing my new BBQ sauce "Sweet Addictions" in Los Angeles as well as in Los Vegas here in 2020. I'm still on my journey but what I truly want, is for somebody to be inspired and know that I'm no different from anyone else who ever had a dream.