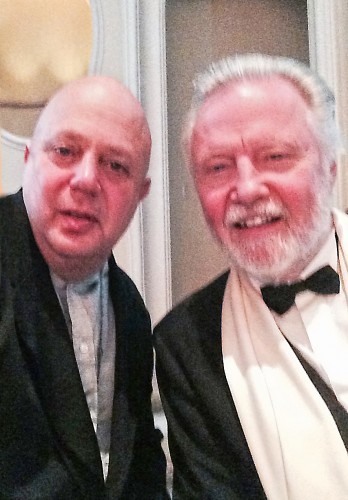 Los Angeles, CA,, USA - - August 6, 2014 /MarketersMEDIA/ — Edward Bass shares in a recent Splash Magagine article Actor Jon Voight’s blast to Penelope Cruz and Javier Bardem, wherein Voight calls their reference in a Spanish petition to Israeli “genocide”, "ignorant." "You should hang your heads in shame. You should all come forth with deep regrets for what you did, and ask forgiveness from the suffering people in Israel," the 75-year-old actor wrote in a letter published in The Hollywood Reporter.

Bass explains, “With the exception of Relativity’s Ryan Kavanaugh, Hollywood's power brokers have remained quiet on the statements accusing Israel of genocide, however, not since Charlie Chaplin did ‘The Little Dictator’ has a non-Jew stood up against Anti-Semitism, today's prevailing sentiment. Prior to World War II Joe Kennedy called it ‘a Jew war’. Charles Lindbergh was convinced that Germany was too powerful to defeat. Steven Spielberg in ‘Imaginary Witness: Hollywood and the Holocaust’ pointed out how even Jewish studio heads never let the truth come out in film or news reels (with the exception of Warner Brothers).”

According to Bass The Palestinians have had a tradition of taking legitimate aid and extortion funds and using them incorrectly, as in the case of Yasser Arafat and his estranged “big spender” wife. He quotes Wikipedia, which states it is believed Arafat indulged in “mass corruption, secretly amassing a personal wealth estimated to be USD $1.3 billion by 2002 despite the degrading economic conditions of the Palestinians.” While his people had no running water, his wife spent millions in Paris. When he died the PLO and she had divvied up the loot, saving some for terror. One underground tunnel cost up to $90 million and its sole purpose is terror aimed at civilians.

In a world where most young people see the Jews as aggressors, Jon Voight rallied some common sense and at least one voice against programmed hatred. The Arab world too is taking a hard look at the side affects of anti-Semitism: after Anwar Sadat was killed by the Muslim brotherhood it seemed impossible for Egypt to support the brotherhood.

The world is divided -- Quatar and Turkey have hedged their bets -- backing terrorists, while Saudi Arabia, Kuwait, Jordon and Egypt are against them. Many would think after 9 11 all of the US would be on the side of the moderate Arab nations, not the extremist ones. What makes it even more confusing is that both Hezbollah and Hamas are supported by Iran and yet both are on different sides of the Syrian conflict.

Israelis accidentally kill civilians who are told by their leaders on television to sacrifice themselves - the Palestinians go straight to Israeli civilians. They are clever in their understanding that the more dead human shields, the more anti-Semitic or ignorant Hollywood support they can get. They know the UN Human Rights commission with Cuba and China will always back them, as a recent document from Hamas revealed.

Many know that the Israeli Prime Minister Netanyahu called the family of the murdered Palestinians many times, yet the Palestinians were celebrating the 3 dead Israeli teenagers as if it were 9/11 all over again. If Israel were to go into a nursery school and start blowing up little children, it would be used as propaganda.

So, thanks again to Voight for helping educate young Hollywood. It is very heartening in a time with so many local conflicts raging, to hear such a voice. Also, it gives hope for the region that so many moderate Arab nations are apparently recognizing the truth about the Israeli/Palestinian conflict.

And in the immortal words of Joan Rivers who blasted Rihanna and Selina Gomez, “They’re not listening. If America were being attacked by Mexico and one rocket came over, there would not be a Mexico.”

About Edward Bass: Edward Bass is a Golden-Globe nominated Producer who has produced alongside such industry heavyweights as Sir Anthony Hopkins, James Franco, and Guillermo Del Toro and Kevin Spacey, and is also a syndicated columnist.