Earth Fund DAO, a new blockchain startup that aims to fund projects trying to save the planet, has just made its first donation to double the impact of Oco Crew, an organization that works with reforestation and carbon capture projects around the world. 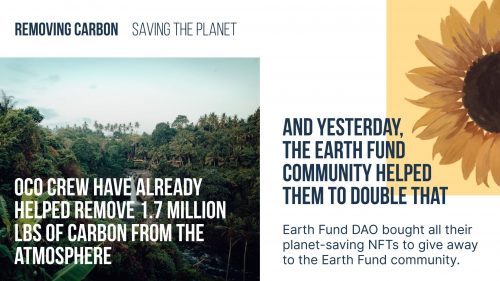 Sheridan, WY, United States - October 21, 2021 /MarketersMEDIA/ — Earth Fund DAO, a new blockchain startup that aims to fund projects trying to save the planet, has just made its first donation to double the impact of Oco Crew, an organization that works with reforestation and carbon capture projects around the world.

With this donation funded by the private sale of its crypto token, 1Earth, Earth Fund plans to make this the first of many projects that could help reverse humanity’s effect on the planet.

"We chose this cause because they’re already doing good work to capture carbon around the world, from the Amazon rainforest to right here in the USA." says Alex Vergara, Community and Communications Lead at Earth Fund "And as we grow, our goal is to let our community use the Earth Fund treasury to fund thousands of more causes like Oco Crew that are making an important positive impact around the world.”

In the last few years, DAOs (decentralized autonomous organizations) have grown in popularity as cryptocurrency has become more mainstream. Earth Fund has taken the mechanics of the DAO and applied them to saving the planet, giving anybody in the world the ability to get involved with affecting and funding projects that could bring about real change.

"The planet’s warming up, eco-anxiety is on the rise and what are some of our richest and best minds doing? Spending billions on one-upmanship and vanity trips to space.” Vergara added. “So we thought, what if we take that idea of a huge treasury and let people from around the world work together to work out the best way to spend it on fixing the planet? That’s what Earth Fund is, and it’s why we’re super excited to have already helped Oco Crew remove another 1.7 million lbs of carbon from the atmosphere and make the world a better place.”

Ben Sterne, founder of Oco Crew, added: “We’re incredibly excited to get this generous donation from Earth Fund and double our impact overnight. And to top it all off, the Earth Fund team also bought all of our Oco Crew NFTs to give away to their community. Every time somebody sells one of our NFTs, 80% of the proceeds go to carbon capture projects, helping out our projects long-term too.

We’re all really proud to be the first cause that Earth Fund community has chosen to fund, and we can’t wait to work with them more as they grow and help more causes like ours make the world a better place.”

The 1Earth token, which gives people the ability to join the DAO and decide how the Earth Fund treasury is spent on planet-saving projects, launches in the next few weeks.

To join their community ahead of launch, head to earthfund.io.