Pingyao International Film Festival ushered in a special event and award ceremony for "Dream Blue·Honor of the Night". 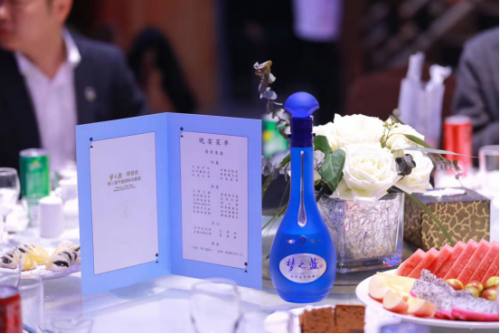 October 20, 2019 /MarketersMedia/ — On October 16th, 2019, Pingyao International Film Festival ushered in a special event and award ceremony for "Dream Blue·Honor of the Night".Chinese and foreign filmmakers gathered together and the honors were also returned to their owners. On the evening, the best director of "Roberto Rossellini Honor" awarded Cesar Diaz, the director of the film "Our Mother", the best film awarded the Brazilian film "High fever", and the jury awarded the film "Sunlight" under".

After the awards, the film festival ushered in the climax of the past six days - "Dream Blue · Honor Night".As the only designated liquor in the Pingyao International Film Festival, the high-end liquor Dream Blue was placed on the table to entertain guests from all over the world. The opening of Dream Blue·Honor of the Night not only means the arrival of the dreams of domestic and foreign filmmakers, but also marks the beginning of a fashion and luxury path for Dream Blue.

For a long time, liquor and movies have belonged to the consumer goods of the human spirit. People use liquor to express their inspiration, and through the film to visualize the inspiration, both have the attributes of emotional connection. Although this property is widely known, few people will combine the two products together.

On the evening of October 16, the honor night of Pingyao Film Festival has not yet opened, and a touch of blue on the scene has aroused people's attention. On the dining table of the guests, the surrounding exhibition area, even on the podium of the gatehouse... The figure of Dream Blue can be seen everywhere.

As a high-end liquor brand, when Dream Blue chooses a brand partner, it will consider whether the branding of both brands is consistent. Only a similar brand tonality can accurately target the audience to achieve meaningful cross-border. Dream Blue has always delivered the “Mianrou Culture”, which is about fresh and luxurious. The film art has always been known for its elegance, focusing on humanistic feelings. The same taste makes liquor and film come together, and finally presents a film and television festival and even an honor night for domestic and foreign filmmakers.

On the scene of "Honor Night", director Jia Zhangke gave a glass of liquor and expressed his gratitude to Dream Blue. He said: "Thanks for the passion of Dream Blue, I hope everyone can be enjoyed yourself today!" In fact, as early as in Pingyao International Film On the day of the opening ceremony, Jia once said something similar. He said, "Due to the sponsorship that comes from Dream Blue, there are such good conditions to let us gather together."

At the scene, many foreign artists toasted and respected the Chinese counterparts. Chinese filmmakers also frequently replied and expressed their gratitude. Dream Blue became the ambassador of communication feelings for “Honor of the Night”, making everyone fall in love with it.

Domestic and foreign artists come together and a variety of artistic elements are essential. Stylish wear, avant-garde interior decoration, exquisite cups and wares... Dream Blue is unveiled. At the dinner party, many filmmakers showed great interest in Dream Blue. They picked up this Chinese liquor and studied it carefully. Many people praised it as “it is so beautiful, like a fine craft.”

Instead of trying its tastes, people always enjoy its appearance, that is the charm for the Dream Blue fashion design style. Abandoning the traditional baijiu’s red and yellow packaging color and choosing blue color to package, changing the general cylindrical bottle body and using a drop-shaped bottle body, all of these conveys the fresh style of Dream Blue, which is different from traditional baijiu, even in the art feast.

When Chinese liquor is still very traditional and telling history, Dream Blue is catching up with fashion and dreams, looking forward to the future, bringing a fresh wind. Dream Blue has always joined hands with art and collaborated with international events. Several years ago, Dream Blue began to focus on creating “Dream Blue · the New Year Concert of the National Grand Theatre”. Together with famous musicians including Lv Siqing, Chen Sa, Feng Mantian, etc., they has presented an audio-visual feast at the beginning of the new year.
From the New Year's Concert of the National Grand Theater to the Pingyao International Film Festival, Dream Blue lets art light up its dreams and create a noble and luxurious and extraordinary image, all of which ultimately makes Dream Blue a creation. The new pattern of fashionable and luxurious brands is favored by more and more elite consumers in the new era.

Nowadays, liquor is no longer a simple drinking, but also a bond to communicatition feelings, a bridge of expressing feelings. With the liquor as the medium, Dream Blue not only brings an artistic feast to domestic and foreign artists, but also promotes and deepens friendship between the guests. The successful holding of Dream Blue·Honor Night is definitely the perfect fusion of liquor and film, which interpreting the development direction of future film art, and opening up its unique new fashion and luxury.