Donald Trump, Jr. praises the classic Trump collectible and displays it on top of his Christmas Tree. 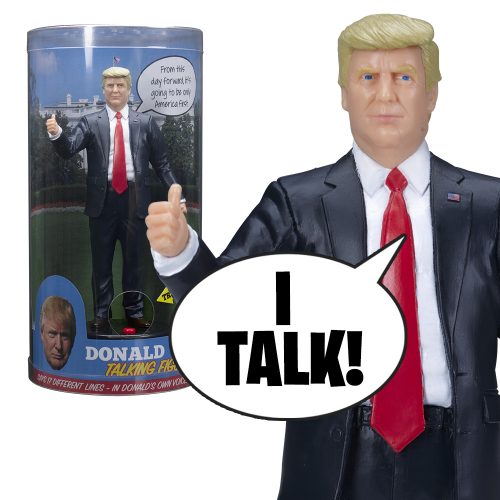 Created by the same company that created the Hillary Laughing Pen and the Trump Talking Pen, the new Donald Trump Talking Figure will have you laughing and cheering! From everyone’s favorite phrase, “…Together, we will make America great again,” to “We are going to drain the swamp in Washington DC,” each familiar phrase has been included to make the most comprehensive and memorable Trump Collectible on the market.

In addition to its crystal-clear Trump voice, this one-of-a-kind collectible Trump gift is a true-to-scale, detailed, talking sculpture of President Trump. Proudly display the 45th President of the United States figure on your desk or shelf. This classic memorabilia item is more than a mere toy or novelty gift, and is perfect for Republicans, Democrats, as well as fans of the Trump Talking Pen and President Predicto™ Magic Fortune-Telling Ball, that talks in Trump’s actual voice.

Jay Kamhi, the creator of the Donald Trump Talking Figure, welcomes the overwhelmingly positive reception of this funny Trump gift. “I think people love it because it’s not a cheap bobblehead or vinyl dashboard troll. This figure is a high-quality replica of President Trump that talks with amazing clarity and volume!” states Kamhi.

The patriotic Trump statue is 7 inches tall while standing on a one-inch base (9 inches total height, display tube included). Batteries come pre-installed so that President Trump begins talking from the moment he arrives! To celebrate the Trump Figure’s new “star” status, Our Friendly Forest is giving away a 20% off Amazon discount coupon code. To take advantage of this offer, Visit http://bit.ly/2S9Tl9G

ABOUT OUR FRIENDLY FOREST
The Donald Trump Talking Figure is a product of Our Friendly Forest, founded by veteran novelty item manufacturer, Jay Kamhi. Our Friendly Forest produces funny, original pop culture toys and novelties that talk, move or light up. The creator of the talking/singing pen, Kamhi got his start over 20 years ago as a NYC street vendor and grew to have his products in many major store chains— including Wal-Mart and Target. Kamhi made his first big splash with the Napoleon Dynamite Talking Doll. Next, Kamhi began creating talking toys based on the outrageous characters from popular TV shows and movies such as Toy Story, Shrek, Family Guy, The Simpsons, Hannah Montana, 40 Year-Old Virgin and many others. In 2015, Kamhi successfully launched his line of funny novelties exclusively on Amazon—increasing revenue to almost two million dollars in one year. Kamhi’s Donald Trump Talking Pen became the #1 selling toy on Amazon in 2016, and Kamhi has created another 12 bestsellling novelty items since. Kamhi’s products have been seen on national talk shows, including The View and Sean Hannity. All of Kamhi’s products can be found in the Our Friendly Forest store on Amazon.com.