The Nizami Ganjavi Initiative seeks to provide English speakers with access to the extensive body of work of the great Eastern poet Nizami Ganjavi (1141-1209), primarily via digitization and web posting of manuscripts, exhibitions, publications, academic conferences, and the Web. 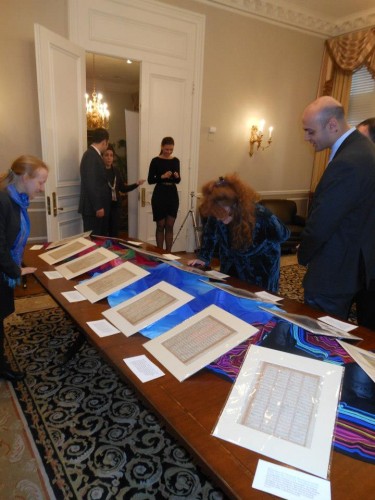 December 21, 2012 /MarketersMedia/ — Washington, D.C., December 21, 2012—During the month of December, the Karabakh Foundation cosponsored a series of events dedicated to the great poet of Azerbaijan Nizami Ganjavi (1141-1209 C.E.) in cooperation with the Nizami Ganjavi International Center and the Library of Alexandria (Egypt). Events focused on a display of some 50 Nizami Ganjavi manuscripts that date to the 14th-19th centuries.

On December 3, guests at the historic Josephine Butler Parks House in Washington, D.C., ushered in the Nizami celebrations in an intimate setting that fostered discussion of the great poet. Dr. Ismail Serageldin, the Director of the Library of Alexandria in Egypt and its Head Librarian (the first person in 1,600 years to hold the position of Head Librarian), spoke eloquently about the poet’s intellectual impact on generations of literary figures and poetry lovers worldwide. Conversation among participants extended into Nizami’s record of progressive thought ranging from anti-slavery sentiments to advocacy of women’s suffrage.

Video taken at the event reveals the beginnings of a wave of appreciation for Nizami in the U.S. The Karabakh Foundation is preparing to develop public appreciation in conjunction with the Nizami Ganjavi International Center via digitization of the manuscripts and a range of public programs.

The second exhibition was held December 15 at the KF headquarters. Invited guests brought to bear a range of scholarly and humanist interests that underscored Nizami’s significance in the modern age.

The lavish splendor and exquisite detailing of the Nizami manuscripts hint at the enormous impact of this master poet over centuries. Nizami lived and worked during a golden age of Azerbaijan, marked by significant literary and architectural expansion—the age of the Turkic dynasty of Ildegozid atabegs, who ruled the Great Atabeg State of Azerbaijan, nominally part of the Turkic Great Seljuk Empire.

Considered a sage, Nizami mastered and synthesized various fields of Islamic thought, from astronomy to mythology, and also produced a substantial body of lyrical romantic poetry written in a colloquial style. He was also proficient in many languages; aside from native Azerbaijani Turki, he was well versed in Farsi-e Dari (literary Persian) and Arabic and he also seemed to know Greek, Hebrew, and Pehlevi, among other languages. He wrote his Khamsa (Quintet of epic poems) in Dari, which according to Oxford professor and Nizami expert Julie Scott Meisami was the lingua franca for poetry in the Turkic Seljuq Empire in that era, although in those poems he used some Azerbaijani Turkic words as well. He wrote his poems in a colloquial realistic style that captured the spirit of upheaval he witnessed.

The Nizami Ganjavi Initiative seeks to make Nizami and his works better known to English-speaking audiences, to make visible Nizami’s legacy in communities across the U.S. Anyone seeking to contribute to the advancement of the NGI can contact the Karabakh Foundation.