George Strait’s “The Cowboy Rides Away” farewell tour is in its final leg and DiscountConcertTickets.com is offering cheap deals on remaining tickets to help fans see their idol. 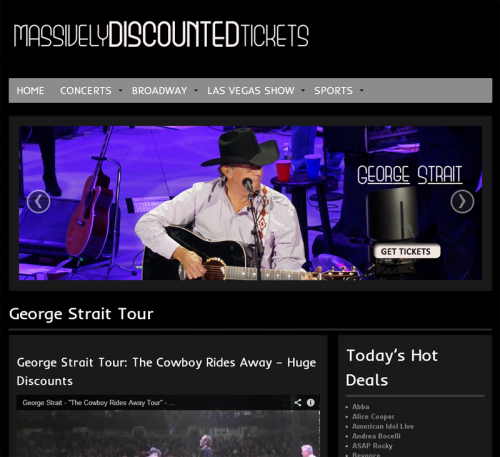 San Francisco, CA,, United States of America - - March 13, 2014 /MarketersMEDIA/ — George Harvey Strait is an actor, producer and country music icon, taking a neo-traditionalist approach that has stayed true to the roots of the sound while expanding its borders, earning him a “King of Country” moniker. It came as a shock when the Country Music Hall of Famer, who got his sixtieth number one at the age of sixty, announced a farewell tour. DiscountConcertTickets.com has honored the man and his fans by publishing a career retrospective along with exclusive discounted tickets to the last concerts in the farewell “The Cowboy Rides Away” tour.

DiscountConcertTickets.com is an online presence that brings together the best and most exclusive deals on concert tickets for genres of all kinds, from One Direction and Lady Gaga to Jeff Dunham to the Chicago Symphony Orchestra. Their tickets for George Strait (http://www.discountconcertticket.com/george-strait-tour/george-strait-tickets/) however come with a detailed biography of the man and his career.

It’s an easy highlight reel to call, as the country singer as seen more accolades than perhaps any other in his lifetime, and includes multimedia content including images from the tour and even a half hour live video feed of the performance to get fans excited.

A spokesperson for DiscountConcertTickets.com explained, “It always comes as a blow when someone as enduringly popular as George Strait decides to hang up the hat, but we thank him for his phenomenal contribution to country music and we wish to reward his fans by sharing the very best prices for the much in demand tickets to his final few concerts. The retrospective was written as a means for fans to understand the gravity of this farewell tour and make sure no one lost out on the chance to see him live, which really is an experience to be remembered for all time.”