Dan Prechtel is giving more meaning to the word “recycle.” The retired Atlanta executive started a charitable service called, Share the Ride. Currently serving metro Atlanta area, Share the Ride picks up your unwanted bicycles, rehabilitates them and drops off the refurbished bikes to charities. 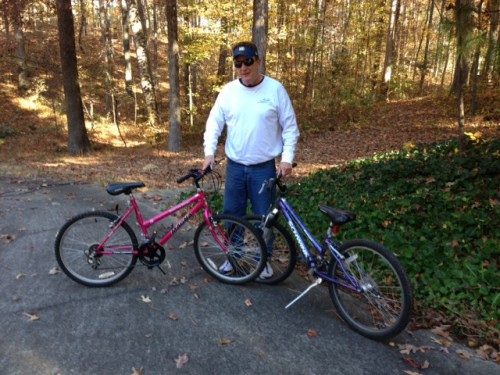 December 19, 2012 /MarketersMedia/ — Atlanta, GA - Daniel Prechtel, 67, wants to make good use of his passion for cycling in his retirement. “I wanted to do something worthwhile,” says Prechtel. The avid cyclist found one of his trail bikes was getting old so he decided to fix it up and give it to Goodwill.

“The guy told me they get rid of bikes just as fast as they come in because so many people need or want bikes,” Prechtel remembers. Dan Prechtel noticed a few days later that about five bikes were collecting dust in his brother’s barn and he realized it’s not unique for folks to have unused bikes hanging around. So, Prechtel got the idea to make a no-hassle way for people to donate bikes to charity and started Share the Ride.

This year Daniel Prechtel either bought or collected a total that he hopes will reach 200 bicycles by year’s end. “I’m grateful for everyone who donated,” he says. Dan Prechtel went on Craigslist to advertise and found many good bikes for sale, very inexpensively and sometimes he could buy a bike for less money than repairs.

“It’s my personal passion,” says Prechtel. “I spend my money, my time to do this service. It’s my way to tithe, to give back.”

As Prechtel points out, a good condition bike could make all the difference in a person’s life. It is an affordable mode of transportation compared to paying for gas and insurance with a vehicle. He imagines some of the clients could be a person new to the country who may not be able to have a car yet. Or, the recipient could be a person who, for whatever reason, may not be able to get a license. Or, a person who’s just re-entering the job market but who perhaps cannot afford a car at this time but can reliably show up at their new job on a bike. Sometimes it is a Veteran who is getting assistance inadvertently from a bike donation. Sometimes it is a child’s Christmas gift. It can be an important pick-me-up in a person’s life and is an ecological and healthful way to get around. “Cycling is a great physical and mental outlet and it’s also family-friendly,” says Prechtel. “Hey, if you’ve got a bike, you can go anywhere.” And Prechtel’s personal mission is to grow the ability for more people to go more places with Share the Ride.

Next year he hopes to grow the service to reach the goal of 250 bikes. He is searching for a small, permanent space for Share the Ride. Daniel Prechtel hopes to hold a bike ride and rally at some point in the new year to share awareness about his service and to collect more bikes. He may look to partner with Rail Trails Conservancy –a group that works to turn old railroad lines into bike trails- or Southern Bicycle League in some way. He holds a membership with each of the groups and continues to take bike rides 3 or 4 times a week.

“I’ve been at this for a couple of months,” says Prechtel of incubating Share the Ride. “Six months ago it was just this idea out of my garage. Now, I feel we’ve worked the kinks out of the system and can take more orders for bike pick-ups and do more work because I’m doing what I love on my own terms and can manage those logistics.”

Prechtel has many family commitments, including assisting his ailing mother, but still wanted to find a worthwhile endeavor to help out people. He does not feel he could be a volunteer scheduled to work particular days and times in the traditional sense. He just wants to help get more folks who need, want, or could just use a good bike, matched up to the inexpensive machine to start riding. Therefore, starting Share the Ride was a natural blend of putting his hobby to good use, while still maintaining the flexibility to keep family commitments.

“For the metropolis that Atlanta is, it’s becoming more cycle-friendly with the Silver Comet Trail and more urban trails,” Prechtel observes. And he not only wants to be out on those trails, he wants to help others get out there too.