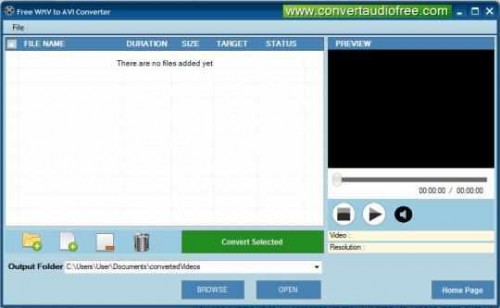 Seattle, WA,, United States of America - - November 27, 2013 /MarketersMedia/ — Windows Media Video, or WMV for short, is a type of video encoding format developed by Windows that promises lightweight, high fidelity video files. Any video published by Windows Movie Maker will use this codec, meaning home movies are usually in WMV format. Unfortunately, this format cannot be played by non-windows devices, and individuals frequently run into trouble as a result. Convert Audio Free have created a new software to solve this issue, allowing users to convert WMV to AVI, a universal file format that was popular when digital video first came onto the scene and that is enjoying a renaissance now.

The software is free to download and to use and has no features hidden behind premium price brackets. The software is lightweight and does not drain a computer’s resources, so can run happily in the background. The user interface is designed to be clean and simple, and compatible with all versions of Windows.

The WMV to AVI conversion process retains the quality and aspect ratio of the original video to ensure that the AVI is of the highest quality when it is finished, and the file is a duplicate of the original so that users need not fear losing their original media.

A spokesperson for Convert Audio Free explained, “WMV files are a great and lightweight codec for those who only use Windows devices, but that population is shrinking every day. Windows phones are still a tiny minority compared to Android and iPhone and Tablets use similar non-Windows operating systems, making these files useless to a generation that wants its media accessible everywhere. Our WMV To AVI Converter is a free way to make movie media universal again, as AVI is playable by almost all default playback software.”

About Convert Audio Free:
Convert Audio Free provide a comprehensive range of audio and video conversion tools developed and launched as freeware for use by anyone. The company has been active since 2011 and has already made waves with critical and user praise, and products regularly syndicated by major distributors like CNET. Compatible with every version of Windows, every product promises to be free, fast and easy to use.