Convert Audio Free has created a new free to use software tool that converts WMV files to MOV files, taking Windows-only format video and converting it to a Mac compatible format. 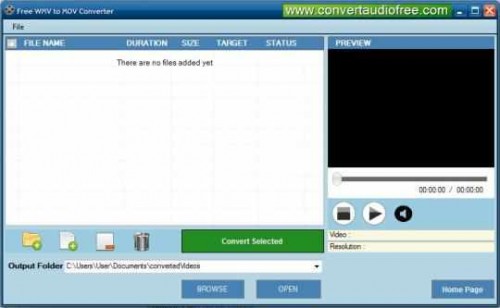 Seattle, WA,, United States of America - - November 27, 2013 /MarketersMedia/ — Windows Media Video is the default format for video created on Windows computers. While the majority of computer users still use Windows, an increasing number of individuals are converting to Mac. This means WMV files are causing problems for more people than ever, and because the two companies are so fiercely competitive with one another, Mac has its own MOV format that it considers the default. In order to bridge this divide in compatibility, Convert Audio Free has created a free WMV to MOV converter so that individuals can start to share media from Windows to Mac without a problem.

Although it has only been released recently the software has quickly been picked up by major freeware distributors CNET and SoftPedia after the program was developed in response to consumer demand. The software is now freely available and comes with an unlimited license, so individuals can convert an unlimited number of files using it.

The software is lightweight and has a simple user interface that is easy to understand and use. It allows individuals to convert one or multiple files from WMV to MOV, and is economical enough in its use of computer memory to run in the background while the PC is used for other tasks.

A spokesperson for Convert Audio Free explained, “Windows Media Video can be a problematic format when it comes to cross compatibility and never more than when dealing with Mac devices, as Mac’s default QuickTime player will not support the format. In order to rectify this issue we’ve created a tool that allows Mac users to convert WMV to MOV, the default format for QuickTime player and Mac devices. This promises to solve a lot of headaches for users sharing media from Windows with friends on Mac devices, and is already proving popular online.”

About Convert Audio Free:
Convert Audio Free develops free and specialized audio and video conversion software for worldwide and unlimited distribution online. Actively innovating and creating new software since 2011, the company now enjoys strong relationships to major distributors like CNET and Softpedia. All software developed by Convert Audio Free promises to be fully Windows compatible, lightweight and easy to use.