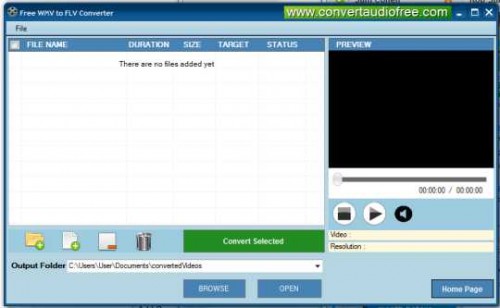 Seattle, WA,, United States of America - - November 27, 2013 /MarketersMedia/ — WMV is a file format used by Windows Media applications and is the primary export format for videos created using Windows Movie Maker. Windows Movie Maker is favored by amateur content creators who nevertheless can attract large audiences online through sites like YouTube. The issue they face is that WMV is not a supported format for YouTube playback and so users are left frustrated as YouTube must convert their WMV to FLV format- taking up time and decreasing overall quality. Convert Audio Free has now launched a new tool to put this process in the hands of content creators.

The new software has been launched recently and is already proving popular, having been syndicated by major resource library sites like CNET and SoftPedia, which collate useful freeware tools for users who know where to look. The software allows users to convert WMV to FLV for quicker uploading and better quality results.

The software is free to download and use and requires little of a computer’s memory and resources to run. It comes with an unlimited free license meaning users can convert an unlimited number of videos, which can be added one by one or as a list that the converter will move through as it operates in the background.

A spokesperson for Convert Audio Free explained, “Most people who create video blogs and online content use simple editing suites like Windows Movie Maker which exports video as WMV. Users then get frustrated when YouTube has to ‘process’ the video and convert it to the native FLV format, often degrading the quality in the process. Our WMV to FLV converter allows individuals to optimize their videos for online playback before uploading so quality is maintained and the videos are published instantly once uploaded.”

About Convert Audio Free:
Convert Audio Free is a software developer specializing in the creation of free to use, high quality audio and video conversion tools. These tools are launched on their website and then syndicated online through major resource repositories like CNET. In business for over two years now, the company goes from strength to strength based on its model of producing simple, functional and easy to use software.