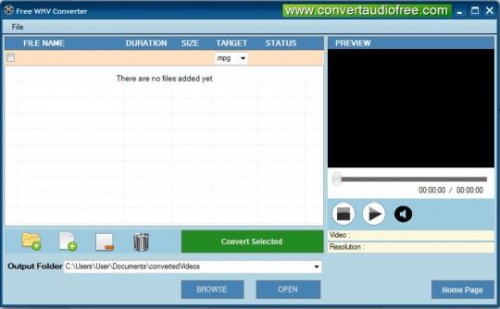 Seattle, WA,, United States of America - - November 27, 2013 /MarketersMedia/ — Windows is still the single most popular operating system in the world, but its market share has decreased significantly in recent years. The rise of Apple, and the dissemination of technological access to include portable smartphones means that people are accessing media in more ways than ever. This means Windows’ WMV format is used less and less, and is causing an increasing number of video playback compatibility issues. Fortunately, Convert Audio Free has now released a WMV Converter to allow people to convert old WMV files to a range of different formats.

The software allows individuals to change WMV files into a wide range of different formats. Simply adding the file to the software’s queue system allows users to select the output format from a dropdown menu, making conversion as simple as a couple of clicks.

The software can be downloaded direct from the Convert Audio Free website or from one of the many major freeware syndication sites on the web. The WMV Converter comes with an unlimited free usage license so users can convert any number of files into any number of new formats. The software is easy to use and is a low resource consumer, running in the background while users continue to operate their computers.

A spokesperson for Convert Audio Free explained, “Windows Media Video was a format created by windows for use with their windows movie maker and media player softwares, but ultimately it is limited as it can only be used by Windows. When most people used a Windows PC and nothing else for their digital media, that was fine, but in today’s world that simply isn’t the case. Now users can convert WMV to multiple different formats optimized for Android, Symbian, iOS and more.”

About Convert Audio Free:
Convert Audio Free is a software developer offering a broad spectrum of audio and visual conversion tools, free to download and use to anyone in the world. The tools created by the company are syndicated on major resource repositories like CNET ensure all their software is free, professional and easy to use. After two years in business they are fast becoming the go to institution for all file format conversion needs.