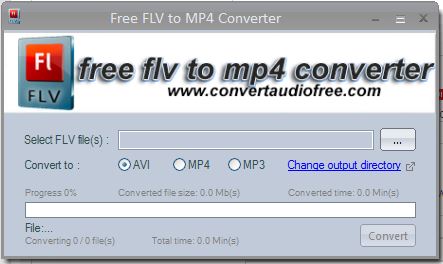 Seattle, WA,, United States of America - - November 27, 2013 /MarketersMedia/ — YouTube is currently the hottest brand in the world with young people, and they are using it even more than social media sites like Facebook. YouTube hosts a huge volume of video content and all this content is in FLV, or Flash Video format. This makes it easy to stream online but almost impossible to play if users download the files. This leaves people without the ability to save their favorite videos to watch offline. Convert Audio Free has developed an elegant solution by offering a free FLV to MP4 converter.

The new software can be downloaded direct from the Convert Audio Free website and is also syndicated on many major resource repositories. It comes with an unlimited free license and can be used to convert as many videos as users wish, meaning they need only convert FLV to MP4 to have a whole catalog of videos available at any time on almost any device.

The software promises to liberate users from the limitations of formatting and its user interface is clear and intuitive to ensure that files can be converted with just a few clicks, or multiple files can be queued from a list without users getting lost in confusing options.

A spokesperson for Convert Audio Free explained, “We have been working hard for years in the audio arena and have now extended our reach to include video. In consultation with our customers one of the most popular requests was for the ability to watch videos from online media platforms offline- on the subway, the train, in the countryside and so on. There are many ways to rip FLV files from video sites, and now with our converter individuals can make those files into MP4 files to be played by their Apple devices, tablets, laptops and other players.”

About Convert Audio Free:
Convert Audio Free are a software house specializing in the conversion of all audio formats, ubiquitous and niche. The company has been active in the industry for over two years and has established a strong reputation for quality. They have now furthered their reach to include other media format conversion including video. Convert Audio Free enjoy both critical and user-based recommendations and their programs are commonly syndicated by major resource libraries.