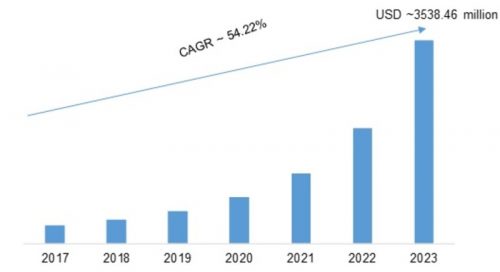 Collaborative Robots Market, also known as cobots, are an upgrade over industrial robotic systems, in the sense that they can interact with their human “coworkers” in a more natural manner and are much more aware of their surroundings than first-generation industrial robotic units. Collaborative robots incorporate advances in machine learning and natural language processing to be able to process verbal cues as well as gestural commands to operate well within the confines of an industrial setup. The increasing adoption of artificial intelligence in industrial robotic units is also a key factor in the growth of the collaborative robots market and is likely to remain key to the market’s growth prospects over the coming years.

Improving the safety of human workers working alongside industrial robots has been a key aim behind the development of the collaborative robots market. Due to the largely autonomous function of industrial robots, they can remain “unaware” of any human worker that happens to stray into their operational zone, resulting in mishaps. This can be prevented by adding technologies such as computer vision, which allow the robotic units to monitor their surroundings and halt or slow down operation if a human worker happens to come into the danger zone. Since industrial robotic units can weigh hundreds of pounds and thus deliver significant blows to a human, the development of collaborative robots is likely to be a major driver for the global industrial robotics market over the forecast period.

In July 2019, Hanwha Precision Machinery signed an agreement with Wipro to develop and distribute automated factory solutions, including collaborative robots.

In June 2019, Veo launched a redesigned version of their industrial robotic solutions, incorporating 3D depth sensing and machine vision capabilities to make the robots aware of their surroundings and capable of adjusting their operations to keep the human workers safe.

The global collaborative robots market is segmented on the basis of payload, type, component, application, vertical, and region.

By component, the market is segmented into controllers, drives, sensors, end effectors, and others.

By application, the market is segmented into pick and place, handling, packaging and palettization, assembling, quality testing, machine testing, welding and gluing, and others.

By vertical, the market is segmented into automotive, electronics & semiconductor, manufacturing, metals & mining, food & beverages, healthcare, aerospace, and others.

Europe is the leading regional contributor to the global collaborative robots market and is likely to hold on to this position over the forecast period due to the rapid development of collaborative robot technology in the region and the widespread adoption of advanced industrial robotics solutions. According to the International Federation of Robotics, Europe has the highest percentage between human and robotic workers in industrial units, at 99 robots for 10,000 workers. This is followed by the U.S., at 84 robots per 10,000 workers, and Asia Pacific, with 63.

North America is the second largest regional market for collaborative robots and is likely to hold on to a major share in the market over the forecast period due to the growing adoption of robotic systems in industrial end uses in the U.S.