12 year old singer songwriter creates original song in response to being bullied; song then selected for use in season one of tv show "Hunting Jessica." 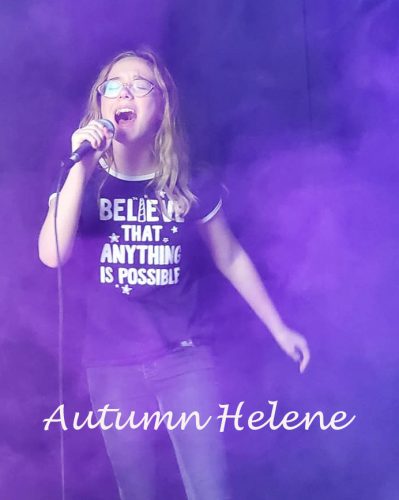 Helene released her song “You Won’t Regret A Thing” last summer in response to being bullied, and it has been selected for use in the new American dark fantasy thriller television series. The series revolves around Jessica, a vampire slayer living in the fictional town of Devil's Bend (Newkirk, Oklahoma), with filming expected to wrap up in April 2020.

Lisa Lee Martin is the director/producer of the Hunting Jessica Series and the owner of Raman-Martin Film Productions, which has offices in Florida and Oklahoma. Martin wrote the screenplay based on a fantasy novel of the same name by Elizabeth St. John. Martin’s prior film work includes: The Surrogate and Trained to Kill (2018), as well as music for tv series “Game of Thrones.” Martin is an American Society of Composers, Authors, and Publishers (ASCAP) eight- time award winning songwriter, following a successful writing career for Rocket Records of London and Jewel Lane Records in Memphis, TN.

“We are proud to introduce Miss Autumn Helene to our Hunting Jessica Series Family,” Martin said. “Her music comes from the heart, with deep lyrics that resonate with anyone who has ever been bullied, or made to feel that they are not good enough. She is a young artist with an old soul and a bright future ahead of her.”

Helene responded, “I’m so grateful for this opportunity to share my music with a broader audience. It is really special to me that the song Lisa chose to use in her show was the first song I ever released. I wrote “You Won’t Regret A Thing” about the physical sensations and emotions I was feeling at the time I was being bullied, as a way to cope and then also to take my power back. I hope people connect with my song, and that it helps them heal.”

“You Won’t Regret A Thing” is expected to air in season one of the show. Helene is also slated to make a cameo appearance on the show in season two, where viewers will have the opportunity to see her perform in the Char-Ron Lounge of the small, fictional town.

“A music collaboration is when two creative artists come together to make something special. In addition to including Autumn’s music in my show, she and I have been talking about collaborating on a song together,” Martin shared. “This is more than a dream come true. I’m so grateful for Lisa’s faith in me and I’m going to keep working my dream,” Helene said.

Autumn Helene is a 12 year old singer/songwriter/musician from Auburn, WA, USA who performs original and cover songs throughout Washington state at festivals, fairs, pubs, parties and special celebrations as a solo performer.

Often compared to artists such as Adele, Lorde and Billie Eilish, Helene’s music is available on most streaming platforms with followers in 42 countries. Helene is a member of American Songwriters, ASCAP, International Singer Songwriters Association, and West Coast Songwriters.