The team at building block toy company Click-A-Brick says the Fitzroy Toys online marketplace platform is a good idea and could potentially be a lot of help to independent toy companies and toy retailers alike by connecting them in a shared online space. 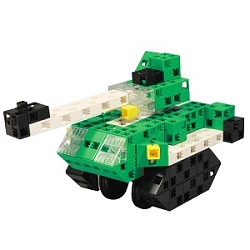 Fitzroy Toys is essentially an online marketplace where independent toy companies can register and give information about their products and their available inventory and toy retailers can register and browse through the toys to help them decide which ones they would be interested in carrying in their stores. This eliminates much of the in-person visiting and pitching that has to be undertaken by toy companies to try and get their products into the hands of decision makers at toy retail outlets.

Developed late in 2014 and officially launched earlier this year, Fitzroy Toys is the brainchild of founder and CEO Stefanie Botelho, who found that even though a lot of independent toy companies were taking advantage of crowdfunding platforms like Kickstarter, they still had barriers to overcome to get their products off the ground. After the toy inventors had reached their goals via crowdfunding, they often still had trouble getting their products into retail stores because the process is so inefficient.

"Kickstarter and Indiegogo get you off the ground, but once you sell to your early adopters, you’re then left with boxes of your board game or stuffed animals, and what do you do then?" Botelho said in a FastCompany article about Fitzroy Toys.

With Fitzroy Toys, the process of getting independent toys onto retail shelves has been streamlined, Botelho explained, enabling the entire process to be done online in a secure marketplace with less effort and paperwork.

As an independent toy company that has yet to make the jump to retail shelves, Click-A-Brick Co-Founders Jason Smith and Georg de Gorostiza appreciate what Fitzroy Toys offers.

“We love anything that can help independent toy companies get their products in front of people, whether it’s online or on store shelves,” Smith said. “Fitzroy Toys solves a major problem that toy companies face even after they get their initial funding. Some toy inventors have a brilliant idea and they can easily get funding through Kickstarter or other crowdfunding places, but that’s usually just enough to make a prototype or to make just a limited amount of inventory. There’s still the problem of how to get your new toy into stores. That normally takes a ton of work that doesn’t always pay off, but Fitzroy changes all that with its online marketplace platform.”

While Click-A-Brick is sold exclusively online at the moment, the co-founders do want to eventually get the building block toys into brick and mortar retail outlets and they believe Fitzroy Toys could potentially help them to do that.