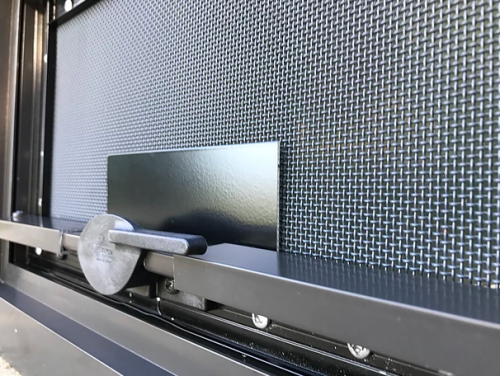 TAPCO manufacturers security hardened screens for windows and doors. The screens and the mounting frames are engineered to prevent break-ins as well damage and injury from projectiles during severe weather.

“Las Vegas is an ideal market for security screens,” says James Kerr, founder and President of Boss Security Screens. “We are excited to partner with a company like TAPCO that has over 50 years experience manufacturing screens.”

Security screens were have become increasingly popular after the massive damage caused by Katrina as homeowners looked for innovative ways to stay safe during extreme weather.

TAPCO was the first to develop a storm screen that was strong enough to withstand high velocity objects like branches and 2x4 boards. Their security screen for windows includes an a fortified steel meshed in housed in a building-grade aluminum frame, which is then mounted over an existing window.

The screens are hinged so occupants can egress in the event of a fire. The latch to open the screen is a patented 2 point locking system that is ADA compliant and designed to be operated by persons of all ages and physical abilities.

Because each screen is custom made, the frames can be any shape and any color to match the building’s features.

According to the FBI, home break-ins are the most common threat to homes. One break-in occurs in the U.S.A. every 13 seconds (source: ucr.fbi.gov)

In the United States, New Mexico, Louisiana and Arkansas have the highest burglary rates per 100,000 people. Nevada is ranked number 8. (source: worldatlas.com)

“I would like to see this technology become more accessible to everyone - if only for the peace of mind,” says Kerr. “The best defense starts with keepings the bad guys out.”