Boostceuticals Nutrition Helps To Boost Energy for the Super Bowl

Boostceuticals, a prestigious USA supplement company which manufactures non-GMO, gluten-free supplements is joining in on the SUPER BOWL fun. It aims to boost energy for fans with a special offering on their top-notch supplements; Boostceuticals DRibose, CoQ10 and Acetyl-L-Carnitine. 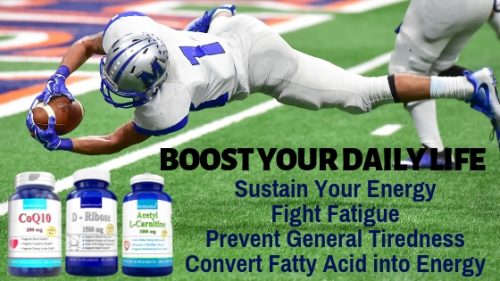 New York NY, United States - January 30, 2019 /MarketersMedia/ — Super Bowl LIII is just days away, with the Los Angeles Rams and New England Patriots ready to battle it out for the Trophy. Both teams went on the road and won overtime thrillers in their conference championships, earning their spot in the biggest game of the year. Millions of fans are expected to watch the Super Bowl event whether on their television or the tens of thousands of people who get to watch the game live.

Whether as an athlete, cheerleader, performer or a cheering fan, energy is important for all of us. Usually one would have an energy drink at hand to keep and sustain their energy levels however, past research has shown that energy drinks contribute to decaying tooth enamel, contain high amounts of sugar and caffeine and are often used as a mixer with alcohol, which has the dangerous effect of drowsiness, making people more likely to engage in risky behaviors. Energy drinks have also been associated with heart, nerve, and stomach conditions, and also linked to liver damage. Is there healthier more natural alternatives? Natural supplements such as D Ribose, Acetyl-L-Carnitine, and CoQ10 support to naturally boost energy levels and help you feel more vibrant, not just for a day but on a daily basis without the usual caffeine crashes.

“We all know that shopping around Sunday’s Big Game presents a valuable opportunity for people to take advantage of special promotions from different companies. said Leo Eliades, CEO of Boostceuticals. “And as a company who cares a lot about health, we want to take it to another level by offering our-top notch supplements to boost not just energy but one’s overall wellness in a natural way.”

Boostceuticals vitamins and supplements have the right blend of science and nature. They are manufactured to the highest quality standards in the USA in an FDA certified facility adhering to all GMP requirements. They are also tested for purity so you know they work. All their supplements are non GMO and contain no artificial ingredients, no coloring, lactose, soy, sugar, gluten, or wheat.

Boostceuticals Coq10 is the best quality pure CoQ10. It increases energy, endurance and stamina levels. Boostceuticals Coq 10 can also support the nervous and immune system. Sometimes referred to as Cq10 it is also a powerful antioxidant which helps anti aging and harmful oxidation. So whether cheering on your team or preparing the snack during Super Bowl Sunday, one has the energy to accomplish what they want to do.

Boostceuticals DRibose known as the best muscle and workout recovery supplement provides an all-important natural energy source for heart and muscle recovery during physical activity. With this, one can avoid general tiredness and soreness due to the excitement of the day. As it increases energy, it also provides greater anti-oxidant protection for muscle tissues.

Boostceuticals understands that after the Super Bowl especially on a Monday, it would be regular life again. Regular would mean increasingly busy lives, leaving many people feeling tired and drained. This special Boostceuticals SUPER BOWL bundle can make a difference. "We are glad to be in a platform where we can partner with people in having a fruitful life with the right kind of boost to their body. We hope to see people of all ages perform their daily activities with enthusiasm!. We only have one body and we need to take care of it” said Eliades.

For more information on this quality Boostceuticals SUPER BOWL supplements bundle, visit https://boostceuticalsnutrition.com/super-bowl-2019 and take advantage of a 20% Amazon coupon code today - available for all readers. You can get a healthier heart for the New year 2019 by visiting their Amazon store.

There are limited supplies of this special SUPER BOWL bundle, they will be popular and they will go fast.