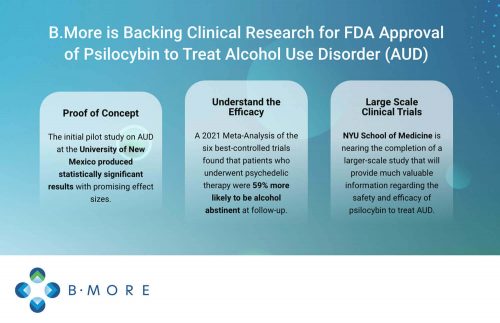 AUD is difficult to treat, and traditional drug and treatment programs have limited success. B.More is working to solve this problem.

As a non-profit, B.More is backing clinical research to bring psilocybin, a classic psychedelic, through the FDA process and see it approved as a prescription treatment for alcoholism.

Making significant progress toward that goal, B.More is preparing to launch multisite Phase 2/3 FDA psilocybin AUD trials. These trials will be the capstone to a prescription medicine campaign to build on the success of a recently completed NYU School of Medicine psilocybin AUD trial. Dr. Michael Bogenschutz, an NYU professor who holds a position at the National Institute of Drug Abuse, is the principal investigator of the trials. The findings of the study are slated to be published in a peer-reviewed journal in the summer.

A year ago, B.More conducted a successful pre-IND meeting with FDA, which planned the process needed for approval of psilocybin as a prescription medication for AUD. B.More has begun the process of contracting with the dozen academic and commercial sites that will do the multisite trial. B.More arranged the necessary pharmaceutical quality psilocybin, and preclinical toxicology for upcoming trials with Usona Institute.

B.More’s achievements have been a decade in the making. The primary impetus and funding for NYU’s recently completed research into psilocybin to treat alcoholism came from B.More’s board members.

Carey and Claudia Turnbull named their nonprofit in memory of Claudia’s brother Brett Moore, who succumbed to a drug overdose in 1971.

Carey Turnbull, the co-founder of B.More, has worked in commercial early-stage drug development for half a dozen companies variously as an investor, founder, and CEO since 2010. As a fundraiser and donor Turnbull has assisted in the funding of more than $30 million for psychedelic research.

Turnbull is on the advisory board of the NYU School of Medicine Department of Psychiatry Psychedelic Research Group and has assisted in the founding of Yale University’s extensive psilocybin research program. Additionally, he is a member of the board of two Foundations: Heffter Research Institute and Usona Institute, both of which promote research on psychedelic plants and drugs at leading University research departments.

“NYU has been a sensational partner and an exceptional research site,” Mr. Turnbull said. “This collaboration underscores the power in the nonprofit model, and the broad family of well-established nonprofits, including the research facilities at prestigious universities, whose assets can be brought to bear in our shared mission of shining a light on the value in psychedelic medicine.”

The need for effective treatment of alcoholism is massive. In the United States, 14.5 million people per year cope with alcoholism according to the US National Institute on Alcohol Abuse and Alcoholism. The CDC reports that excessive drinking causes an average of 95,000 deaths yearly and costs the US $250 billion per year in lost workplace activity, healthcare expenses, criminal justice expenses and damages.

Existing treatments fail to cure the majority of those with alcohol use disorder. A study published May 2019 in the “Journal of Psychopharmacology” revealed that 70% of alcoholics relapsed within a year of ending traditional treatment programs.

Psychedelic treatments appear to show better results and have been shown to be safe when administered in a therapeutic setting. A 2021 meta-analysis of the six best-controlled trials found that patients who underwent psychedelic therapy were 59% more likely to be alcohol abstinent at follow-up.

Clinical trials suggest that psychedelic medicine may produce new opportunities not seen before in prescription medicine. A single dose appears to have a long duration effect.

Unique qualities of psychedelic drugs may be responsible for the better results seen in the early trials. Psychedelics like psilocybin promote synaptic growth, or “rewiring” of the brain. It's called neuroplasticity and is a key determinant of learning and forgetting. Normally, this growth is impaired in psychiatric disorders.

Psilocybin breaks negative and unhealthy thought patterns and promotes the formation of more useful ones, according to research cited in Psilocybin-Assisted Therapy: A Review of a Novel Treatment for Psychiatric Disorders published in 2017 in the Journal of Psychoactive Drugs.

“No other medicine does that,” Turnbull said. “Psychedelics aren't medicines taken daily, and they appear to have long-lasting effects. For example, they aren't like Valium. You can take Valium and not be tense anymore. But as soon as Valium is metabolized out of your system, you're tense again. It didn’t cure anything.”

B.More is committed to finding better solutions for treating alcoholism and other addictions to help those who have found little success with more traditional programs.