Simply known as gough, Beernuts Productions’ Company Director is a Jack of all trades – writer, producer, editor, director and actor. He is also blind. Proving his determination and talent, gough has embraced the challenges of his disability, establishing his own streaming service, Beernuts Productions. 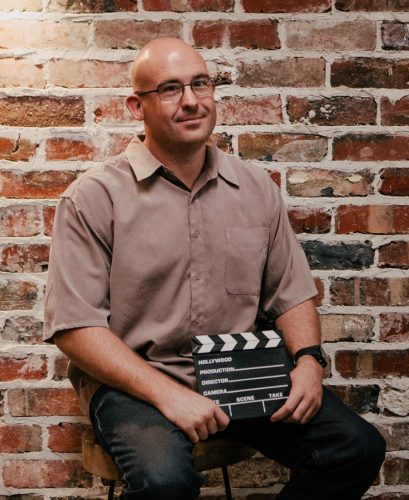 He is also blind.

gough made history as the first legally blind person to create a feature film unassisted, but in order to get ahead in the entertainment industry, he had to go it alone.

“It became clear to me that based on my disability I would not be able to produce my work the ‘normal way’,” he said. “Interest in my work quickly vanished when they found out I was blind. However, I felt my work was entertaining and people would enjoy watching it, so I made the decision to self-fund my first film and distribute it myself.”

Proving his determination and talent, gough has embraced the challenges of his disability, establishing his own streaming service, Beernuts Productions.

The only independent streaming service in Australia, Beernuts Productions has, against all odds, become a one-stop shop for ground-breaking cinema, television, audio and book entertainment, featuring everything from hilarious sketch comedy and political satire to drama and documentary.

gough, who scripts the films, says he knows exactly how he wants each scene to look. A sighted guide ensures everyone is following his direction. Recent productions include mockumentary How to Treat Women and audiobook Beernuts Productions Presents A Guide to Relationships.

Based on Queensland’s Gold Coast, gough works with some of Australia’s finest actors, artists and production crew, spotlighting the talent of local artists on the world stage.

Of his streaming service, gough says, “Our prices are cheaper than other streaming platforms and it also gives brilliant local talent - not just actors but artists and musicians - a chance to showcase their skills to the world, where they may not have had that opportunity in the past.”

The prolific producer continues to branch out, recently releasing a podcast featuring local and international personalities.
“Our work is accessible to anyone with a good and cheeky sense of humour. We mainly do comedy, however our opening project was a full length 90-minute documentary about disability and mental health, two very serious subjects.”

Starting out as a radio producer, gough has done it all, even touring internationally as a stand-up comedian before creating his filmmaking legacy.

While creating quality media is gough’s ultimate goal, he also hopes to send a strong message, not to people who have disabilities, but to those who don’t.