ADAX is an automated liquidity protocol that facilitates trades within the Cardano ecosystem in a completely decentralized and non-custodial way. 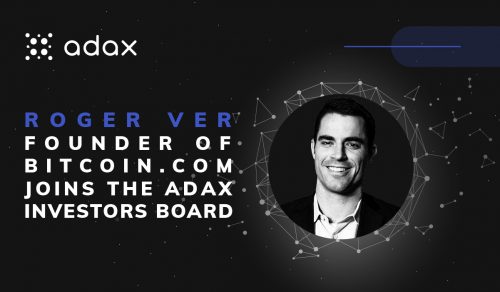 Nicosia, Cyprus - July 4, 2021 /MarketersMEDIA/ — Since the project’s inception, ADAX has racked up an impressive list of accomplishments. The automated decentralized exchange has already made a number of headlines announcing its partnerships with big names from within the DeFi industry. It has also undergone a successful bout of private and public token sales, as well as token listings. The most recent recognition of its integral role within the Cardano ecosystem has been the addition of Roger Ver, the so-called ‘Bitcoin Jesus’, to its community of dedicated believers.

One of the early crypto enthusiasts, Mr Ver is best known for his early support of startups such as Bitcoin.com, Kraken, Ripple, Blockchain.com, BitPay, ZCash that subsequently grew into industry titans. Mr Ver has been a proponent of the Peer-to-Peer Electronic Cash System since 2011, tailoring his investment strategy to support projects that demonstrate high growth potential. Following this principle, Mr Ver has once again decided to invest early, with an expectation that ADAX decentralized exchange is likely to play a substantial role within the future Cardano-based DeFi industry.

Mr Ver’s investment in ADAX follows the news of Mate Tokey, also a co-founder of Bitcoin.com, joining the decentralized exchange as a strategic advisor. There is already widespread expectation within the crypto community that with the help of Messrs Ver and Tokey ADAX is likely to demonstrate exponential growth and a substantial increase in early adoption. This expectation is reinforced by other notable developments, such as ADAX’s recently signed partnerships with Black Dragon, a fundraising and marketing group, as well as Charli3, a decentralized oracle within the Cardano ecosystem.

ADAX (PRO) token, listed on ExMarkets, is currently one of the few freely tradeable Cardano native tokens, which has been on a firm upward trend ever since its private and public sales. In a clear demonstration of the dedication of the project’s community, over 12m tokens have already been allocated to the staking pool.