Reviews on 10 BEST Juicers and 15 PROS and CONS of Cold-press and Centrifugal Juice Extractors Published by FreeJuicingRecipe.com 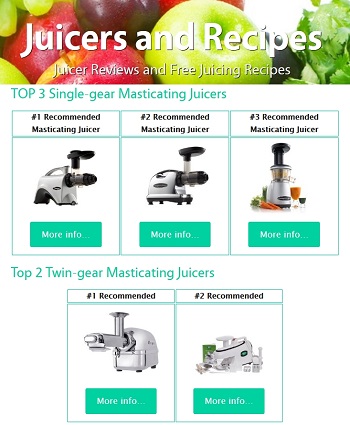 Los Angeles, CA,, USA - - June 11, 2014 /MarketersMedia/ — “One of the biggest problems of certain types of juicers is destruction of vitamins, minerals and anti-oxidants during the process of juicing” says Kathy Walther, a co-founder of FreeJuicingRecipe.com. “Masticating juicers are generally less guilty of this sin compared to centrifugal juicers. The best masticating juicers not only extract out the maximum volume of juice from vegetables and fruits, but also minimize destruction of various macro and micro nutrients for a considerable period after juicing” adds Walther.

15 PROS and CONS of Centrifugal and Masticating Juicers was recently published by Walther to help consumers understand the differences between different types of juice extractors, so that the reader can make an intelligent decision about which type of juicer suits him or her best.

It describes “heat” and “oxidation” as the two main factors that destroy vitamins, minerals, and anti-oxidants of the extracted juice. Generally, loss of nutrients by heat inactivation and oxidation is minimal with masticating juicers. In contrast, the nutrient loss can be significantly higher with centrifugal juicers. This is mainly because of differences in the rotation speed of the juicing apparatus. While the juicing gear of a masticating juicer typically rotates at 50 - 80 rotations per minute (RPM), the grating disks of centrifugal juicers rotate at speeds as high as 1000 RPM. The high rotational speed heats up the juice resulting in heat inactivation of heat sensitive nutrients. On the other hand, the high speed rotation introduces considerable amounts of air into the juice. It’s this mixing of juice and air that causes foam or froth on the top of the juice. The oxygen in the froth can oxidize certain nutrients destroying them. This is why the above comparison recommends masticating juicers over centrifugal models as better juicers.

The 5 BEST Masticating Juicers were also recently reviewed with detailed descriptions on Pros and Cons of each model. They sub-divide the best cold press juicers in to horizontal and vertical masticating juicers and single-gear and twin-gear mastication juicers. Twin-gear juicers, also known as triturating juicers, give the highest quality juice. The Super Angel All Stainless Steel triturating juicer is probably the best juicer in the market. However, the all stainless steel build and the 15 year warranty make it unaffordable to most households. However, there are many other single gear models to choose from that are good not only for juicing fruits and vegetables, but also grasses and seeds like wheatgrass, alfalfa, fenugreek, oat grass and flax seeds. They also review the best wheatgrass juicers for those who drink wheatgrass juice on a regular basis.