It's not too early to book Caleb Chapman's Crescent Super Band and their spectacular holiday and Christmas music show. 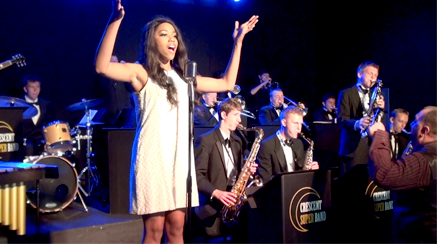 Once audiences experience a live Crescent performance, they're amazed to find out this impressive pop band is made up entirely of high school students. Director Caleb Chapman auditions and selects only the brightest and most talented young musicians and vocalists in the state of Utah for his award-winning band. Year after year they walk away with the Best of State award for Best Professional Band, and DownBeat magazine has named them the Best Youth Band on the Planet multiple times. They have performed with countless jazz legends and Grammy-winning artists, while receiving standing ovations at every stop. Wowing audiences is what they do. In addition to their Christmas show, this incredible performance band is in demand for special events of all kinds. To see more premier bands from Green Light Booking, visit Green Light Booking party bands.

Director Caleb Chapman founded the Crescent Band in 2001, taking it from a band that nobody ever heard of to one of the world's best pop bands. Their repertoire includes music taken from the great American Songbook, music such as high-energy pop hits, movie and show tunes, Broadway favorites, jazz standards, and more. Performing familiar tunes with fresh and vibrant arrangements, and delivered with infectious enthusiasm, they have crowds all over the world clamoring for more.

Coming from all corners of Utah, these top musicians form a pop band that's unmatched in energy and talent for a group of high school-aged students. Their critically-acclaimed, high-octane performance at New York's famed Carnegie Hall was just the beginning for this group. They may look young, but if audiences were to close their eyes during a live performance, they would assume they were listening to some of the best professional musicians in America.

But as talented as the band members are, it's not all about them. It can be every bit as entertaining watching Caleb Chapman, the band's director, as he races ferociously across the stage, coaxing his young musicians to put everything they've got into each and every tune, which they willingly do. Each musician has the skill to deliver incredible solos, but as a collective unit, these musical prodigies deliver a unified sound that exceeds that of its individual members.

People who are lucky enough to be in the audience at a live Crescent Super Band holiday and Christmas music performance, are in for an experience they won't soon forget. As a concert reviewer for the Crescent Super Band Carnegie Hall performance, Jeffrey Williams stated "do not walk, but run to the box office and get the tickets before they sell out. It is truly the experience of a lifetime."