Tunnel Vision-The Bomb Maker Has Arrived is a new novel by James E. Craven under publication by CreateSpace. 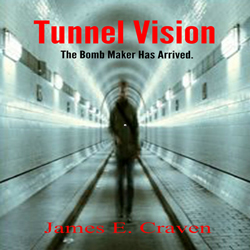 December 12, 2012 /MarketersMedia/ — This fast paced action thriller has been successfully written and published within the Amazon.com book store in both digital and softcover format. The story follows the footsteps of a national hero as he undergoes the horrible tragedy of losing his wife and 2 children to a drug-addicts murderous rampage. This is just the beginning for Michael McDaniel (main character) because his brother's life of crime soon develops into something far worse. Boston is soon to become the next victim in the war on terror. Michael pits all his skills in martial arts against drug dealers, the mob, and the bomb maker and the evil working of his terror cell. It is amazing how the author puts all the pieces together to create a masterful piece of writing.

Ultimately, the novel conveys a story of inspiration and survival as the hero (Michael McDaniels-Boston native) somehow overcomes one impossible situation after another. This book is truly one of the most anticipated and hair-raising action thriller releases of 2012. James E. Craven has certainly managed to out-do himself and especially the competition. All the reviews available on Amazon.com have been 5 star, extremely positive and have described the novel as being the best action thriller of the year and possibly all-time.

Commenting, James E. Craven stated, "I am thrilled with the initial launch of my novel, Tunnel Vision. I really never expected the amount of success the book has had. The reviews have all been extremely positive and I'm very happy to know my fans really enjoy the story behind the novel. To complement it's very successful launch, I will be showcasing it further with a free download promotional period beginning December 14th and ending December 16th."