Live on Kickstarter, Athleate Club is an all-new app looking to revolutionize the way the world eats. 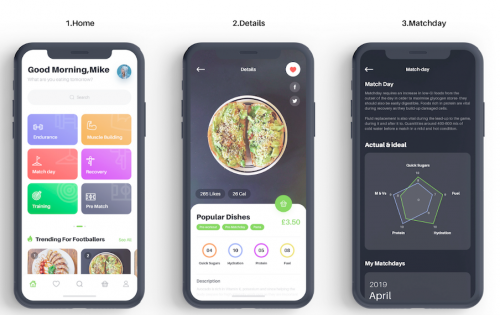 London, United Kingdom - August 26, 2019 /MarketersMedia/ — Athleate Club, the all-new app looking to revolutionize the way the world eats by merging the world of athletics and food, is live on global crowdfunding platform Kickstarter and raising funds to bring the project to life.

As 2020 marks the start of a new decade, it also will mark the vigorous growth of a new food trend – towards sports and health alongside a decline in fast food and junk food. Sports has always been an attractive lure; in the 1960s, it transformed sportswear from something trivial to fashionable. With marketing and endorsement, the Athleate Club looks to transform the food industry in the same manner.

"When I was traveling around the world, I read ‘Shoe Dog’ and ‘Pouring you heart one cup at a time,’ says founder and CEO Patrick Reynolds on the inspiration behind the project. “Both Nike and Starbucks’ influence followed around me wherever I went, I began thinking why not combine them both?”

Athleate Club plans to make this happen creating meals, snacks and drinks according to different human and environmental factors through the help of scientific research and athletes themselves. Users will be able to follow their favorite athletes diet and food choices while viewing the scientific nutritional value in a clear and easy-to-use interface. They can also connect with friends, and see what they’re eating to help motivate one another. Finally, the app is able to fully customize a diet by learning and understanding factors such as goals, sports, weight and environment. Finally, the app will also include a range of meals and snacks, designed by world-class nutritionists and chefs.

With the global nutrition market forecast to leap from $28 billion to $45 billion in 2022, Athleate Club is hoping to tap into a massive and fast growing industry. With a successful funding, the company is looking to launch the app and eventually, create a chain of Athleate Clubs around the world with a retro sports club vibe for all athletes to experience it first-hand.

“Sports is everywhere. Yet, obesity kills more people than famine. There is a hole in the market which might start as a niche but will become dominant,” adds Reynolds. “The Athleate Club isn’t just a company; it’s a colossal opportunity in both the tech and sports nutrition sector.”

The Athleate Club is currently live and available to support on Kickstarter: https://www.kickstarter.com/projects/athleateclub/the-athleate-club

The Athleate Club LTD. is a start-up brand that is focussing on revolutionizing the food industry. We research and supply meals, snacks and drinks according to different human and environmental factors through the help of scientific research and athletes themselves. Initially, our app will enable users, whether they are world-class or everyday athletes, not only to interact but customize nutrition according to their needs and wants. In the long-run, we want to create a chain of Athleate Clubs around the world with a retro sports club vibe for all athletes to experience this first-hand.

For more information on The Athleate Club please visit www.athleate.com