Sign Up Your Account Send Press Release
MarketersMEDIA / Newsroom / At a CAGR of 14.1%, Compressed Natural Gas Market is projected to reach $36,035 million by 2023

China is one of the major countries in the compressed natural gas market and is expected to grow at the highest CAGR of 14.4% by value in Asia-Pacific region. 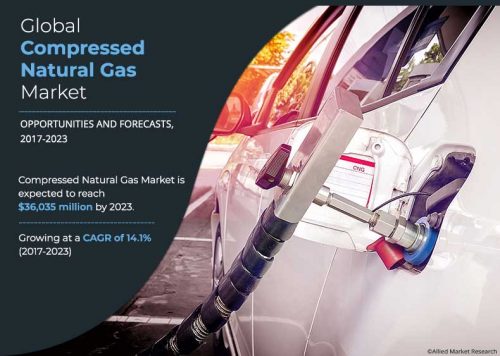 At present, the market is driven by low-cost of CNG with growth in energy requirement across the world. In addition, continuous exploration for non-conventional sources of energy and growth of the lager shale gas market also fuel the market. Furthermore, stringent government regulations on account of environmental concern and increase in subsidy among various regions such as Asia-Pacific and LAMEA has advanced the demand for CNG in the automotive fuel market. However, the initial investment cost is too high and limited number of fuel stations restrain the growth of the market.

The Asia-Pacific and Europe region collectively accounted for approximately three-fourths of the global compressed natural gas (CNG) market share by revenue. Emerging economies such as China, India, Pakistan, and Argentina are estimated to dominate the market for the coming years.

• The unconventional sources market is expected to grow at the highest CAGR of 6.3% in terms of volume during the forecast period.

• The medium duty/heavy duty trucks end user segment is anticipated to grow at a significant CAGR of 14.0% by 2023.

• North America is expected to show highest growth rate in terms of revenue with a CAGR of 14.5%.

• China is one of the major countries in the compressed natural gas (CNG) market and is expected to grow at the highest CAGR of 14.4% by value in Asia-Pacific region.

• The non-associated gas segment accounted for more than half of the market share in 2016, and is anticipated to grow at the significant CAGR of 6.1% by volume.