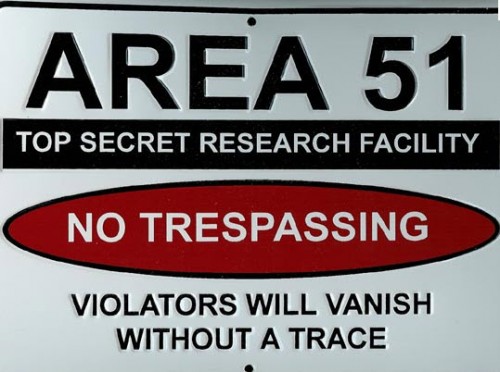 December 3, 2012 /MarketersMedia/ — Las Vegas, NV (December 3, 2012) – TourGuy.com is now offering all-inclusive Area 51 Tours From Las Vegas of the mysterious military base Area 51. The tour includes a trip on the famous Extraterrestrial Highway, lunch at the Little A’le’Inn and a visit to the infamous Black Mailbox, a sacred meeting place for UFO enthusiasts around the world.

Area 51 has been shrouded in mystery since the military began operations at the southern Nevada location outside of Groom Lake in the early 1940’s. The United States Military did not even acknowledge its existence until 1995. The highly guarded military base is the center of several conspiracy theories including the study of extraterrestrial life, alien aircraft, the development of time travel and the creation of sophisticated weaponry.

Founder and CEO of TourGuy.com James Hoke says, “Area 51 is an iconic location known throughout the world. It’s the X-Files come to life. Our new Area 51 Tour is a seriously chilling experience you won’t forget.”

Area 51 tours from Las Vegas begin with complimentary hotel pick up starting at 7:00 am and include an Area 51 lunch special, bottled water and snacks. Guests are transported by luxury SUV as they travel the Extraterrestrial Highway before arriving at the absolute perimeter of Area 51 where they encounter “Men in Black” guards standing watch over the world’s most protected and secret military base.

Along the way, guests get an up close and personal view of ancient Indian Petroglyphs that tell the tales of ancient aliens touching down on earth. Tour guides also point out several locations where several Hollywood documentaries and feature films such as Independence Day were filmed.

The tour operates Monday’s and Wednesday’s only or by reservation for parties of 4 or more from 7:00 am to 5:00 pm. Groups are encouraged to call to schedule special dates and times. TourGuy.com is currently offering special pricing on the Area 51 Tour starting at just $159. Prices are all inclusive with no hidden fees.