Do you want more traffic and exposure? Get on APNews now
Sign Up Your Account Send Press Release
MarketersMEDIA / Newsroom / A Blossom-ing Victory: Malaysian Jewelry Designer Carves Her Name in Italy 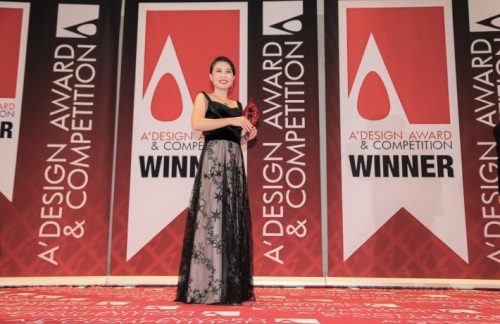 The date undoubtedly brought significant meaning to Ivy Teong, Founder and Chief Designer of Juwelen Design as she received three awards for her winning works, Blue Daisy under the A’ Jewelry, Eyewear and Watch Design Category. The prestigious competition has honoured 2,437 winning designers from 106 countries in 98 different disciplines. Among all submissions, only 30% were voted as winning designs by the juries.

It All Began with a Blossom

Everything began the moment she encountered the blue daisies at a florist. “The blossom captivated me from the first sight. It’s rare as you don’t get to see blue daisies often,” says Ivy.

The charming colours of blue and yellow were simply mesmerising that she decided to translate it into Blue Daisy, a versatile jewelry collection that can be worn in eight unique ways with interchangeable function between pieces.

“My design inspirations come from the things surrounding me, particularly nature. I’ve an imaginative mind, I feel the unlimited ideas flowing from the universe and translate what I see into sketches, designs and real pieces,” says Ivy.

The blossom-inspired Blue Daisy will be showcased at the A’ Design Award Exhibition at MOOD Ex Chiesa di San Francesco, Como, Italy from now until 30th July 2019.

Ivy loved art and crafts since young, even though her passion grew to the extent where Art became her favourite subject in school, yet it never crossed her mind to become a designer.

She enrolled at a local university majoring in Marketing whilst juggling with work to earn a livelihood. After graduation, she began her working life in the corporate world primarily in Telco and Banking industries until the day she fell in love with pearls she saw at a shop.

She began to create her own pearl pieces at home as a hobby in 2012 following an enrolment in pearl beading class. She sold her works to friends and in random bazaars which received encouraging responses.

This eventually led her to pursue a certification in pearls and jewelry design from Gemological Institute of America (GIA) in Bangkok. Later, she also obtained her certification in jewelry manufacturing arts locally.

That one encounter with pearls marked the turning point in Ivy’s life. She quitted her stable income job and founded Juwelen Design.

Experience the Difference with Custom Jewelry

“Why do customers hesitant over custom jewelry? It’s because they worry the outcome is not what they have expected due to lack of communication,” Ivy emphasizes. By providing personalized services, she is able to bridge the gap from design consultation to design drawing up to final piece.

Being an independent jewelry designer, there are less overhead expenses for Ivy; in which the savings are being passed down to her customers without compromising the quality and workmanship. Besides eliminating the intermediary costs, the customers feel engaged and know what to expect as they are dealing directly with the jewelry designer on their desired pieces.

Jewelry is an Expression of Art

The way Ivy looks at design is “There isn’t right or wrong in designing, it’s all about design elements.” As she puts it, design makes things, life and the world more beautiful. Beautiful jewelry makes one stands out from the rest, enjoys a different stature and represents significance of one’s personal statement. Ivy believes jewelry is beyond visualization yet captivates stories and emotions.

Ivy noticed women have difficulty in matching jewelry with their attire and easily get bored with it. She aims to establish a versatile series of jewelry collections that cater for Asian working women. She believes women deserve to be attractive by wearing affordable jewelries.

Apart from local events, Ivy also aspires to explore the international platforms such as exhibitions and extend her designing services to international jewelry houses.

She is grateful to have a local and international trusted supply and manufacturing chain established over the years, together with an experienced Gemologist working with her. She is open to free design sketching and consultations on products or services for customers who are keen.