Self-published by a Vietnam veteran and his son, book chronicles more than 50 Vietnam veterans memorials nationwide with 350 professional photographs and lists of the fallen, authors report 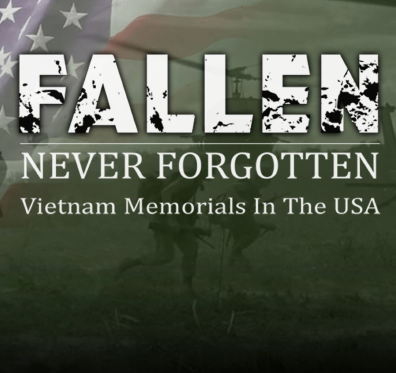 ELMSFORD, N.Y. - April 21, 2017 /MarketersMedia/ — Fifty years ago, Ronny Ymbras and nearly half a million other American soldiers were serving in Vietnam. As a paratrooper in the 101st Airborne Division of the U.S. Army, Ymbras was one of 23 wounded in an extreme friendly fire incident that left 13 fellow infantrymen dead. By the time the United States withdrew from Vietnam eight years later, more than 58,000 American soldiers had died in the war.

As Memorial Day 2017 approaches, one of the best books on Vietnam War veterans memorials is now available in a special, hardcover, large-format edition signed by author and Vietnam veteran Ronny Ymbras. With 350 beautiful, full-color photographs documenting more than 50 Vietnam veterans memorial locations nationwide, Fallen Never Forgotten: Vietnam Memorials in the USA includes state-level lists of all those who did not come back alive, along with detailed information about each memorial. Since self-publishing it, the authors of the book have given presentations at the West Point Museum, Barnes and Noble locations, and elsewhere.

"I've done my best, and now I just hope that my fallen brothers can forgive me for taking nearly fifty years to honor them," said Ymbras, who at age 69 still makes paratrooper jumps at military reenactments and other special events. "I'm proud to say that this is their tribute and that they will never be forgotten. There were some obstacles to overcome on the way to the release of our first self-published book, but the work has been truly exciting and rewarding."

By giving other veterans a chance to visit in spirit the many memorials they might not otherwise be able to see, Fallen Never Forgotten has become one of the most personally meaningful Vietnam War books for many who served their country. For a limited time, a special hardcover edition signed by author Ronny Ymbras is available at the book's official website with a discount of $10 off the regular price.

"This special Vietnam Veterans Memorial book is my father's way of honoring those who made the ultimate sacrifice and of supporting the many other vets who are still with us today," said co-author Matthew Ymbras. "Even for those who cannot be there in person, Fallen Never Forgotten brings these many sacred memorials to life in ways that help heal and raise much-needed awareness."

About Fallen Never Forgotten: Vietnam Memorials in the USA:
Raising awareness and helping the living heal, Fallen Never Forgotten chronicles more than 50 Vietnam veterans memorials across the United States with professional photographs, background information, and state-level lists of those who made the ultimate sacrifice.