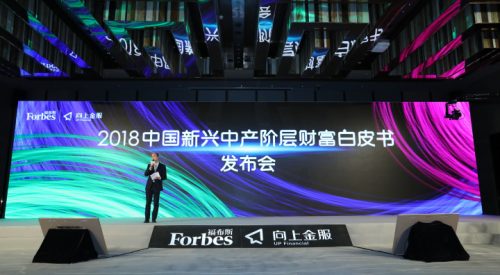 On January 10, an extraordinary press conference was held at the Conrad Beijing Hotel. Together with the leading technology finance companies in China, Forbes co-sponsored the "White Paper on the Emerging Middle Class Wealth 2018" (hereinafter referred to as the "White Paper"), in which from four aspects, namely the crowd appearance, wealth conditions, asset allocation and lifestyle, it reveals the wealth conditions, life style, inherent behavior and investment motivation of the emerging middle class so as to provide new ideas and reference directions for the inspection of wealth information of emerging middle class, and integrated financial services for emerging middle class wealth accumulation.

With the rapid development of Chinese economy and the rapid accumulation of household wealth, "middle class" group is growing, appears in the form of a new class and has become the backbone of the social structure of China today. In the "White Paper" co-published by Forbes and Up Financial Service, a comprehensive analysis of age, gender, educational level and occupation has been conducted and the emerging middle class has been interpreted as a new social group.

According to the "White Paper" report, the emerging middle class in China tend to be younger in general. They are mainly engaged in mental work. They mainly live on salaries and bonuses with a high degree of education and they have received specialized training. Thus intellectual capital has brought them more wealth and social status. Among them, the proportions of men and women are 54% and 46% respectively, and the 80s account for 78% and 80% respectively.

In response to this phenomenon, participants who attended the "White Paper" conference conducted in-depth analysis and discussion. Forbes China editor-in-chief Mr. Kang Jian has made an interpretation on the consumerism, behavior and life philosophy of the emerging middle class. He said: "there is a huge market potential for the emerging middle class and they represent a vibrant and evolving world in the future." Yuan Chenglong, founder and CEO of Up Financial Service, believes that "emerging middle class are an inevitable outcome of social and economic development, pregnant with enormous social energy and as the cornerstone of the" pyramid".

During the conference roundtable discussion, Yin Zhentao, deputy director of the Law and Finance Research Institute of the Institute of Finance of the Chinese Academy of Social Sciences, Wei Wei, partner and COO of Up Financial Service, Chenglong and Zhuomo, cutting-edge economists, middle class spokesmen and writer Guo Cheng joined as the four distinguished guests in the roundtable discussion. They also discussed the emerging wealth situation in the middle class.